Top Stock Highlights of the Week: SPH’s Swansong, acquisitions by ComfortDelGro and United Hampshire US REIT

We take a closer look at acquisitions from a blue-chip company and a REIT, as well as the latest set of results from a media conglomerate. 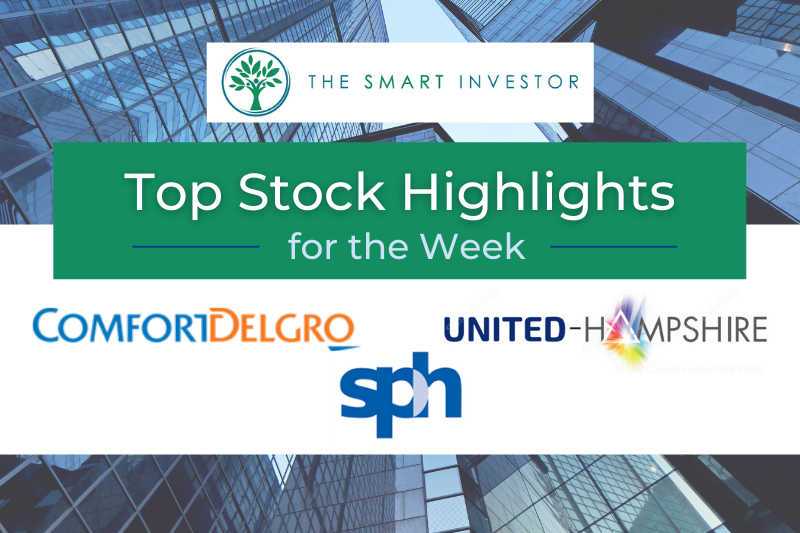 This week’s highlights take a look at acquisitions made by a blue-chip transport conglomerate, a REIT with overseas assets, as well as the latest full-year earnings (perhaps, the last) from Singapore’s media giant.

ComfortDelGro, or CDG, is a land transport conglomerate that owns a fleet of around 40,000 buses, taxis and rental vehicles.

The transport business operates in Narrabi, New South Wales, and the total consideration amounted to around S$1.96 million.

With this acquisition, Forest Coach’s bus operations will expand to 21 buses, while CDG’s total Australian bus fleet will increase to near 2,500.

This purchase will increase the scope of ComfortDelGro Corporation Australia’s (CDC) operation and help to deepen its presence in the New South Wales region.

Singapore Press Holdings, or SPH, is a media organisation that publishes newspapers, magazines and books in both print and digital editions.

The group also owns a 65% stake in SPH REIT (SGX: SK6U) and owns and manages a portfolio of purpose-built student accommodation assets (PBSA) in the UK and Germany.

It could be the media company’s last report in its current form.

Total revenue for the year inched up 2.4% year on year to S$475.1 million from higher rental income from its PBSA and retail and commercial portfolios, helped by lower rental reliefs granted.

SPH enjoyed a fair value gain of S$66.6 million from the increase in valuation for its investment properties, resulting in the group booking a net profit of S$92.9 million, reversing the S$83.7 million loss chalked up in the previous fiscal year.

The group declared a final dividend of S$0.03, tripling the amount declared and paid out last year.

In September,  shareholders had approved for its media business to be transferred to a non-profit company.

This transfer is expected to be completed in December this year.

This condition was a necessary one for Keppel Corporation Limited’s (SGX: BN4) proposed acquisition of SPH.

Should this transaction be approved, SPH will be privatised and delisted.

United Hampshire US REIT, or UHREIT, invests in a diversified portfolio of grocery-anchored and necessity-based retail properties in the US.

As of 30 June 2021, UHREIT’s portfolio comprises 22 mostly freehold grocery and necessity properties and self-storage facilities worth around US$587.1 million.

The REIT announced its maiden acquisition since its IPO of two predominantly grocery-anchored properties for around US$78.25 million.

The properties Penrose Plaza and Colonial Square are located in Pennsylvania and Virginia, respectively, and extend UHREIT’s foray into the US Eastern seaboard.

If these REIT terms sound confusing, here is a quick guide to familiarise yourself.

This acquisition also increases UHREIT’s exposure to eight US states, up from six previously, and no single state’s contribution exceeds 30%.

The REIT’s top 10 tenants’ contribution to base rental income also decreases from 66.2% to 61%.

UHREIT has reported that essential retailers such as grocery stores and home improvement outlets continue to thrive despite the ongoing pandemic and amid the increased popularity of e-commerce.

Therefore, the REIT’s rental income should remain steady and so will its DPU.