CapitaLand is Listing Its Investment Arm: 5 Benefits Investors Can Expect

The real estate giant has highlighted many benefits in spinning out its investment management arm. 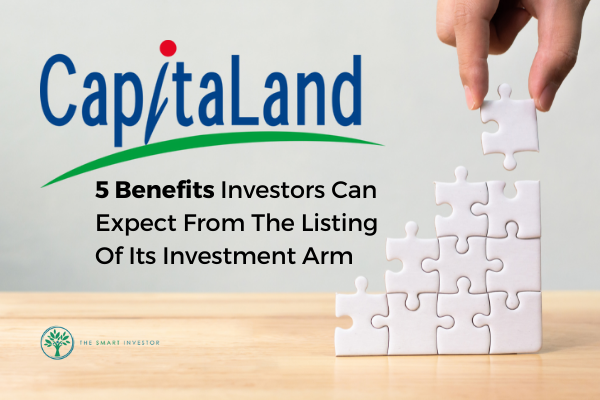 A reminder to shareholders who are voting for the CapitaLand resolutions that the date and time for the EGM and Scheme Meeting are 10 August at 2:00 p.m. and 2:15 p.m., respectively.

If approved, CapitaLand’s shares will go “ex” on 3 September and the cash consideration will be paid out on 16 September.

The crediting for CapitaLand Investment Management and CapitaLand Integrated Commercial Trust shares will also be done on 16 September.

Around four months ago, CapitaLand Limited (SGX: C31) surprised the market with a proposal to privatise its property development arm to restructure itself into a real estate investment manager (REIM).

This move will split the company into two, with the development division fully owned by CLA Real Estate, a unit of Temasek Holdings.

CapitaLand’s investment division will be separately spun off as “CapitaLand Investment Management” or CLIM and will be listed on the Singapore stock exchange.

The group has provided a more comprehensive presentation on the benefits of this corporate action, as well as a definitive timeline on when this will take place.

Here are five benefits that investors can expect.

The spin-off of CLIM will create a global REIM with a presence in more than 30 countries and over 230 cities.

CLIM’s future growth is backed by interest from institutional investors who have steadily increased their allocation to real estate in Asia over the last eight years.

The fund management arm has access to numerous opportunities by tapping on the group’s global platform.

The lodging arm intends to diversify into adjacent sectors such as purpose-built student accommodation (PBSA) and multi-family asset classes.

Its business is also global and consists of reputable brands such as Citadines, Somerset and Ascott.

Together, these two platforms can ramp up CapitaLand’s recurring fee income by scaling up their fee-generating AUM.

Both divisions have a healthy growth track record.

For FUM, the fee-related earnings amount to around 0.4% of the funds’ value while for lodging, it is 0.7% of the operational units under management.

3. Nurture the growth of listed and unlisted funds

CapitaLand has adopted a disciplined approach to investing and has designated three strategic growth areas for its fund management strategy.

These funds consist of a mix of both listed and unlisted funds, with the intention of nurturing growth in both.

The recent announcement of the launch of its second India Logistics Fund adds yet another feather to CapitaLand’s cap by contributing to the further growth of its unlisted FUM.

The group has been active in acquisitions for its listed REITs such as Ascendas REIT (SGX: A17U) and Ascott Residence Trust (SGX: HMN).

The former had acquired the remaining 75% stake in Galaxis back in May, while the latter had concluded the purchase of three freehold rental housing properties in Japan last month for S$85.2 million.

The listing of CLIM may also trigger a re-rating, as the new company has now shed its development arm.

The P/B for listed REIMs was around 2.9 times versus just 0.9x for CapitaLand at present.

On a price-earnings basis, REIMs also trade at a slight premium to developers in Asia.

The average forward price to earnings ratio (P/E) of Singapore, Hong Kong and China developers was just 8.7 times versus 21.8 times for listed REIMs.

CapitaLand is actively recycling capital to maximise value for shareholders.

Since 2018, the group has consistently exceeded its annual S$3 billion target for divestments.

For the 2021 year to date, a total of S$11.2 billion worth of divestments has been conducted, significantly above the S$3 billion target set.

In effect, CapitaLand is steadily growing its capital base through targeted divestments.

To add icing to the cake, some of the divestments have also increased FUM as the property stakes are sold to either joint venture partners or REITs.

This could be our riskiest (and weirdest) move in years.

Recently, we polled the public for 3 dividend stocks.

And we’ll be buying one of them for our portfolio.

Now, it might sound crazy to stake our money on the public’s opinion.

But we’re not leaving this decision to chance.

To make the most optimal decision, we’re going to deep dive into each stock’s strengths, weaknesses, and long-term income potential.

And you’ll be among the first to see this analysis when you join our webinar on 29 July.

With our money on the line on 3 “random” stocks, this could be one of the most intense presentations we’re having.

If you want to gauge the potential of these 3 stocks for yourself, this webinar is perfect for you.

Click here to register a seat for free now!