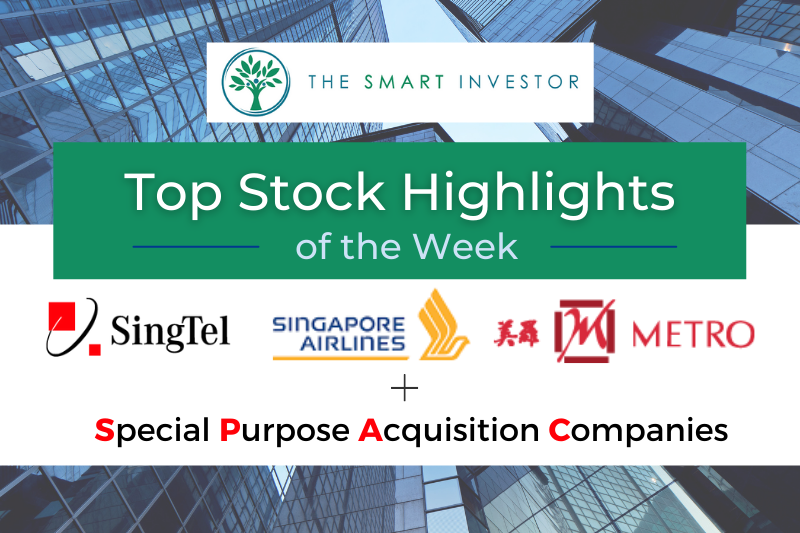 Here are some interesting corporate snippets for this week.

Meanwhile, another blue-chip company, Singapore Airlines Limited, or SIA, is raising money through the issuance of notes.

As part of its S$10 billion multicurrency medium term note programme, SIA is issuing US$600 million worth of notes that are priced at 3.375% per annum.

These notes will be due on 19 January 2029 and pay semi-annual coupons.

Net proceeds from the notes will be used by the airline for aircraft purchases and aircraft-related expenses, as well as for general working capital purposes.

SIA reported that demand for the bonds was healthy, with order book exceeding US$1.2 billion, more than double the face value of the bonds.

Inclusive of this notes issuance, the airline would have raised close to US$22.4 billion in liquidity since the onset of the pandemic.

We first wrote on special purpose acquisition companies, or SPACs, back in late September last year.

Back then, we had highlighted these new IPO vehicles as a new trend to watch for in 2022.

The pace has picked up considerably since then, and now two sponsors are planning to list their SPACs by the end of January.

The first, Vertex Ventures Acquisition Corporation, or VTAC, will be issuing 11.8 million units at S$5 a piece, and its units will commence trading at 2 pm on 20 January.

The public offer consists of 600,000 units and each unit comprises one share and 0.3 of a warrant.

The SPAC is targeting six promising sectors that include financial technology and autonomous driving and has a set of six criteria for its potential business target.

Meanwhile, a second SPAC, Pegasus Asia, is due to start trading at 9 am on 21 January.

The SPAC is offering a total of 25.6 million units, and the public tranche is similar to VTAC at 600,000 units.

Each unit will comprise one share and 0.5 of a warrant.

Pegasus Asia is seeking a business with a proven business model that can scale. Some areas it is looking at include consumer technology, health technology, and digital services, principally in the Asia-Pacific region.

CEO Neil Parekh sees “many good opportunities” in Southeast Asia and hopes to be able to de-SPAC as soon as possible.

Bloomberg reported this week that telecommunication company (telco) Singtel was mulling options for its Australian fibre assets under its subsidiary Singtel Optus Pty.

Recall that the telco had disposed of its mobile phone towers unit last year for A$1.9 billion.

The assets, which could potentially be worth a few billion dollars, could be partially sold off.

Singtel may also partner with an investor on a sale and leaseback transaction.

Such a move will help the telco to raise more cash to boost its growth in other areas.

Singtel, however, has emphasized that there is no certainty or assurance that any transaction will take place and that it continues to regularly review options to optimise its assets.

Metro Holdings, a property and retail group, announced that it had formed a strategic collaboration with Daiwa House Industry Co Ltd (TYO: 1925) through a memorandum of understanding (MOU).

This investment collaboration spans asset classes such as logistics facilities, commercial facilities, and housing in Japan, Singapore and the Asia-Pacific region.

Metro had earlier subscribed for 51.625 million units of Daiwa House Logistics Trust (SGX: DHLU), a REIT that debuted late last year on the local bourse, for around S$41.3 million.

A year ago, the group had purchased a 26% stake in Boustead Industrial Fund, a private fund set up by real estate solutions specialist Boustead Projects Limited (SGX: AVM).

These moves show Metro’s commitment to building up and growing its real estate footprint as it collaborates with different players in the industry.

Everyone knows Asia’s healthcare sector is booming with activity, flooded with stocks set to outperform. But some investors might now know how to react. So in our upcoming FREE webinar “Asia’s Healthcare Moment,” we reveal all the top opportunities, so you can get started right away. Click here to register!