We report on a slew of REIT earnings this week. 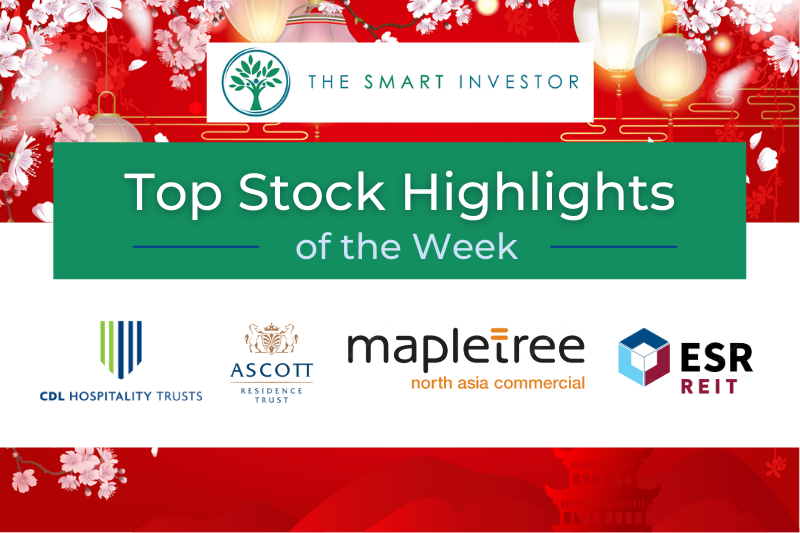 Welcome once again to this segment where we feature stock highlights from various companies.

This week, we summarise the results and prospects for four REITs.

CDL Hospitality Trusts, or CDLHT, is a hospitality trust with assets under management (AUM) of S$2.9 billion as of 31 December 2021.

Its portfolio comprises 18 properties that include 4,631 rooms and a retail mall, and also one build-to-rent project with 352 apartment units.

Distribution per stapled security (DPSS), however, fell by 13.7% year on year to S$0.0427 due to a decline in capital distribution from its UK hotels and proceeds from the sale of two hotels.

The hospitality REIT’s gearing stands at 39.1% and it has a low cost of debt of just 2%.

CDLHT has a couple of asset enhancement initiatives (AEI) planned.

It is upgrading the remaining four floors of The Lowry Hotel which will be completed in early this year, and also plans to refurbish all 360 rooms at Studio M Hotel, to be completed by May 2022.

Ascott Residence Trust, or ART, is the largest hospitality trust in Asia Pacific with an AUM of S$7.7 billion as of 31 December 2021.

The trust owns 93 properties with more than 17,000 units located in 43 cities within 15 countries.

More countries reopened themselves to international travel in 2H2021, contributing to better results.

The trust has been active in reconstituting the portfolio for income stability, with 11 investments in longer-stay accommodations since January last year.

ART is also rejuvenating its portfolio with new developments such as a student accommodation property in South Carolina in the US and the refurbishment and rebranding of Hotel Central in the US which has been completed.

The higher NPI was due to lower rental reliefs doled out to tenants as well as the contribution from the newly-acquired Hewlett Packard Japan Headquarters Building.

The REIT had an aggregate leverage ratio of 42.1% with a low annualised effective cost of debt of 1.84%.

82% of the REIT’s borrowings are on fixed rates, mitigating against the risk of rising interest rates.

MNACT is involved in a pending merger with Mapletree Commercial Trust (SGX: N2IU) that will catapult the combined REIT into the top 10 largest commercial REITs in Asia.

ESR-REIT is an industrial REIT that invests in 56 properties across Singapore with a total AUM of S$3.2 billion as of 31 December 2021.

The industrial REIT also completed two AEI worth S$22.2 million, with another worth S$53.3 million slated to be completed in the third quarter of 2023.