Year in Review: The 5 Best-Performing Blue-Chip Stocks of 2021

We present five of the best performers among Singapore's blue-chip companies. Some of them may surprise you. 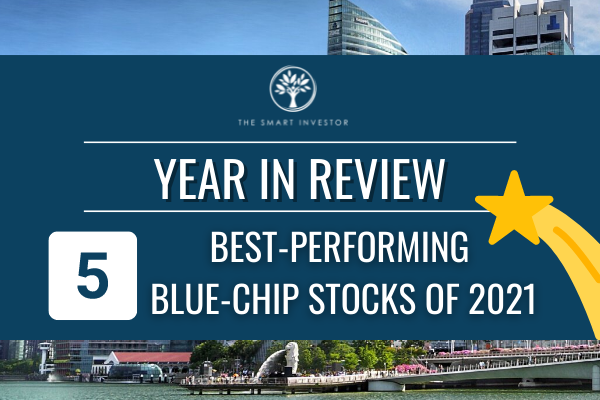 Blue-chip companies are prized for their established and stable businesses..

As such, it’s no surprise to see several of these companies remain resilient during the pandemic due to their entrenched market position.

Some have done even better, seizing opportunities to diversify their revenue stream, thus solidifying their position within their sector.

Others were able to recover from the trough of 2020 to regain their footing.

From among this varied bunch, we have our top performing stocks for the year.

Some of these names may go on to do even better in 2022 as the economy recovers and rebounds.

It all began back in April when the media conglomerate reported a mixed set of results for its fiscal 2021 first half as well as a strategic review.

The group was seeking to unlock shareholder value by exploring options and had appointed Credit Suisse as its advisor.

Things moved fast after the announcement.

And there was more to come.

Offshore and marine conglomerate Keppel Corporation Limited (SGX: BN4) then surprised the market by making an offer to acquire SPH for a total implied consideration of S$2.099 per share in August.

A bidding war then ensued with a Temasek-linked consortium making a final S$2.40 cash plus shares bid for the former media darling.

Unsurprisingly, SPH shareholders are the clear winner as its share price has more than doubled from S$1.14 at the start of the year to S$2.33, up 104.4%.

Yangzijiang Shipbuilding Holdings Ltd, or YZJ, comes in second, with its shares rising by 34% year to date to S$1.30.

The group, which is one of the largest shipbuilding companies in China, has five shipyards in Jiangsu province and produces a broad range of commercial vessels for its clients.

However, gross margin contracted by 14 percentage points to 13% due to higher material costs, resulting in gross profits being cut by almost a third.

Year to date, YZJ has snagged order wins for 124 vessels worth US$7.4 billion, a record for the group.

YZJ has also proposed a spin-off and separate listing of its investment segment that can allow the division to pursue growth and expand its global footprint.

Hongkong Land Holdings Ltd, or HKL, is a property group that owns and manages more than 850,000 square metres of prime office and luxury retail in Hong Kong, Singapore, Beijing and Jakarta.

Underlying attributable profit rose by 12% year on year to US$394 million.

The group maintained its interim dividend at US$0.06 per share even though its net asset value declined by 4% year on year to US$14.75.

HKL has committed US$500 million to a share buyback program that will last till the end of 2022.

DBS Group is Singapore’s largest bank and its shares have risen close to 18% year to date to end at S$29.87.

The group has demonstrated its resilience throughout the pandemic as its rising fee income has more than offset the weakness in net interest income.

The lender chalked up a record S$5.4 billion of net profit for the first nine months of 2021.

It has also been busy in the last 12 months, setting up a new digital exchange in collaboration with Singapore Exchange Limited (SGX: S68) and acquiring Lakshmi Vilas Bank in India.

These initiatives should benefit the bank moving forward as it looks forward to economic recovery in 2022.

United Overseas Bank Ltd, or UOB, is another one of Singapore’s three big banks.

UOB intends to tap on rising affluence and digital adoption in Southeast Asia to grow its franchise.

With a 910% year on year rise in its loan book for 9M2021 and impending rising interest rates, the lender can look forward to better net interest margins in 2022.

Hot off the press! In our latest special FREE report, Top 9 Dividend Stocks for 2022 – and 3 Tactical Shifts to Maximise Your Profits, we’re revealing 3 special categories of stocks that are poised to deliver maximum growth in 2022 and beyond.

Download for free to find out which are our safe-harbour stocks, growth accelerators, and pandemic winners! 2022 is coming round soon, so CLICK HERE to find out now!