This week, we took a look at a semiconductor player, a coffee shop owner and passenger volumes at Changi Airport. 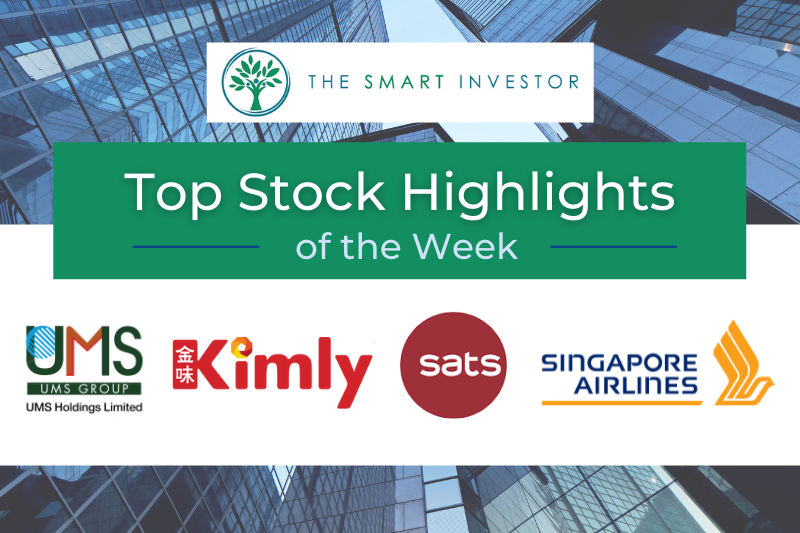 Welcome to this week’s edition of Top Stock Highlights where we cover earnings, business updates and interesting corporate events and announcements.

The group saw an increase in semiconductor demand which buoyed sales, and enjoyed maiden contribution from the aerospace business following its acquisition of JEP Holdings Ltd (SGX: 1J4).

Aerospace revenue came up to S$3 million for the quarter, and UMS expects this to improve with a rebound in the aviation industry as more countries reopen their borders.

An interim dividend of S$0.01 per share was declared, similar to the previous year.

CEO Andy Luong is confident of the group’s prospects as UMS is a key beneficiary of higher capital expenditure spending by global wafer fabs.

The Semiconductor Equipment and Materials International (SEMI) has projected that fab equipment spending for front-end facilities will jump by 18% year on year to an all-time high of US$107 billion this year.

BlueWeave Consulting, a market research firm, expects the global semiconductor market to hit US$820.1 billion by 2028, growing at an annual rate of 5.3%.

These estimates, along with the gradual recovery of air travel, bode well for UMS’ performance in the coming quarters.

Kimly’s business demonstrated healthy growth in the first half of fiscal 2022 ended 31 March 2022.

One of the largest coffee shop operators in Singapore with an extensive network of food outlets and stalls, Kimly’s food retail division also serves up Japanese and Western food and operates food courts and full-service restaurants.

The increase in revenue was due to contributions from the newly-acquired Tenderfresh business in October 2021.

However, lower footfall at Kimly’s food stalls and coffee shops led to lower revenue from its outlet management and outlet investment businesses.

Despite the rise in revenue and gross profit, net profit fell by 14.7% year on year to S$18.5 million due to higher selling, distribution and administrative expenses.

An interim dividend of S$0.0056 was declared, unchanged from a year ago.

Kimly expects the operating environment to remain challenging as cost pressures from inflation will bump up the cost of raw materials, rental and staff costs.

Despite these headwinds, the group will focus on expanding its footprint further, diversifying its product offerings, and increasing efficiency and productivity.

Things are looking up for air travel.

At the end of April, passenger movement at Changi Airport rose to nearly 40% of pre-COVID levels.

This was more than double the 18% logged in March.

SIA’s March passenger numbers were already at a one-year high of 893,000 in March, surging nearly nine-fold year on year.

SATS had reported a 39.4% year on year jump in flights handled and a 22.1% year on year growth in meals served in the first nine months of fiscal 2022.

These numbers look set to improve further as more travellers make their way to Singapore, while more Singaporeans are also gearing up for overseas holidays after a two-year hiatus.

The government is committed to the recovery of Changi’s Air Hub status and will double down on its investments in digitalisation and automation to transform the sector.

Cost relief was also granted for landing, parking and rental costs while wage and training support was provided to ensure capabilities were maintained to prepare for the eventual recovery.

Investors should feel sanguine about the sector’s prospects in the coming quarters as air travel momentum picks up.

Everyone’s talking about Fintech. But is it all hype? For the first time this year, we’ll be revealing the full story behind the trillion-dollar sector in our upcoming webinar “Picking Your Stocks In Fintech’s Trillion-Dollar Growth”. Discover the stocks we’re excited about, and the opportunities that are slipping past investors’ radars. Register a FREE seat here before it’s too late!