We provide updates on a blue-chip airline, a REIT and a glove manufacturer. 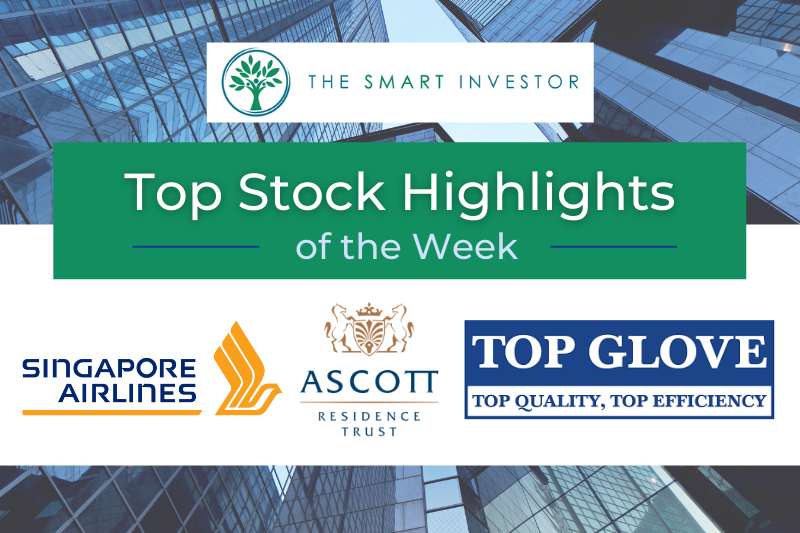 Here are some highlights from corporate announcements and earnings events during the week.

Singapore Airlines Limited, or SIA, gave an update on its cargo division, which has been the group’s leading revenue contributor since the onset of the pandemic.

Cargo loads have also exceeded pre-COVID periods since 2Q2022, with a load factor at 117% for the latest quarter, up from 81.8% in the prior year.

The division is also scaling new heights, with revenue exceeding S$1 billion for the first time in 3Q2022, up 81.5% year on year.

SIA Cargo is looking at additional verticals to expand the division further, such as live animals, pharmaceuticals, events, and perishables.

The division has launched new initiatives to capture demand in other sectors, such as a new service to transport time-and-temperature sensitive perishables with speed and reliability.

A cold chain air freight service was also launched back in 2018 and is now being used for vaccine transportation.

Seven A350F freighters are on order and will replace the group’s existing Boeing 747-400F fleet.

Deliveries will commence in the fourth quarter of 2025.

It was a mixed bag of both good and bad news.

Starting with the negative aspects, revenue for the quarter fell by 73% year on year to RM 1.44 billion.

The group is now witnessing an adjustment back to the scenario before the huge surge in demand that came about due to the pandemic.

However, encouraging signs are appearing.

Glove demand has enjoyed some recovery as 2Q2022’s sales volume is higher than the two preceding quarters.

And although the average selling price has continued to decline, management has hinted that the bottom is near and that an uptick should occur soon.

Other glove makers have halted production, thus easing the oversupply situation; while Chinese glove suppliers are seeing tariffs being imposed by the US.

In addition, Top Glove is also deferring some of its expansion plans as the group transitions to the “new normal”.

It has also put its Hong Kong listing on hold for now due to unfavourable market conditions.

The properties will be acquired at an average net operating income (NOI) yield of 4% and will result in a 1.7% increase in distribution per unit (DPU) assuming 100% debt is taken up.

The acquisitions are expected to be completed between the first quarter of 2022 and the second quarter of next year.

ART has justified the acquisitions based on several reasons.

Secondly, the properties are brand new and do not require any immediate capital expenditure, are also located close to retail and commercial areas and are well-connected to transportation nodes.

Crucially, this acquisition helps to increase ART’s proportion of longer-stay properties from 16% of its gross profit to 17%, with a target to grow this further to between 25% to 30% in the medium term.

Post-acquisition, ART’s gearing level will stand at 38.3% and the trust will also enjoy a very low cost of debt at around 1% per annum.