We bring you snippets from a REIT, a blue-chip offshore and marine giant, and a telecommunication company. 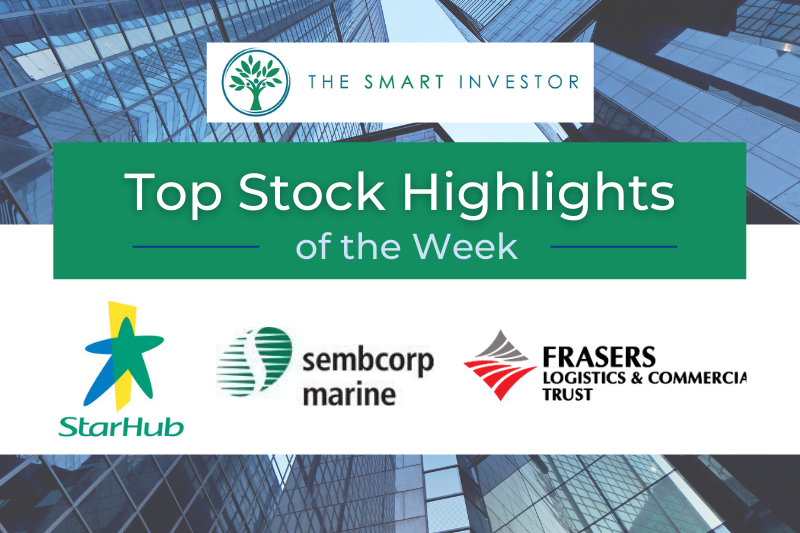 Here are some of the interesting stories curated for the week.

Of the 16 projects under execution, five have been further delayed by one to three months and will result in material cost overruns.

At the end of September, SMM’s order book stood at S$1.42 billion.

With the increased costs required to complete these contracts, SMM estimates that its losses for the second half of 2021 (2H2021) could be in line with the losses incurred in the first half.

It’s not all bad news though.

SMM’s recent rights issue has boosted the group’s liquidity, enabling it to continue its operations till at least end-2022.

Order visibility has also improved this year with the group actively developing more than 10 tender opportunities in the renewable energy and gas solutions segment.

SMM has made successful inroads into the renewables sector and expects significant growth in the clean energy segment in the coming decade.

It is also working hard to build its capabilities to become an integrated offshore and marine engineering specialist that can provide a wider suite of products and services to its customers.

The industrial and commercial REIT’s portfolio value increased by 9% year on year to S$7.3 billion, and the overall occupancy rate remained high at 96.2%.

FLCT’s aggregate leverage stood at 33.7% as the valuation uplift of its properties helped to reduce its gearing by 2.7 percentage points from the last quarter.

The cost of debt remained low at 1.6% and the interest coverage ratio was healthy at 7.3 times.

The REIT has a debt headroom of nearly S$2.5 billion to make yield-accretive acquisitions, and has a right-of-first-refusal over S$5 billion worth of properties from its sponsor Frasers Property Limited (SGX: TQ5).

FLCT’s lease expiry profile is also well spread out, with no more than 16.6% of gross rental income expiring in any fiscal year, thus reducing concentration risk.

StarHub provided its latest 3Q2021 business update, and it looks as though business conditions are gradually improving for the telecommunication company (telco).

Like its counterpart Singtel (SGX: Z74), StarHub reported a 5.6% year on year rise in total revenue while its net profit (excluding government reliefs) increased by 5.1% year on year to S$40 million.

The revenue picture was mixed, though, for its four divisions, with broadband and enterprise chalking up healthy year on year growth while mobile and entertainment saw revenue falling year on year.

One big positive was that free cash flow for the quarter more than doubled year on year to S$166.5 million.

The average revenue per user (ARPU) also remained resilient, for its mobile postpaid segment, though it declined slightly for its prepaid division.

Broadband ARPU jumped by 13.3% year on year to S$34 due to the take up of higher-tier internet plans along with faster routers.

For its entertainment division comprising cable TV, ARPU increased by 7.5% year on year to S$43 due to increased prices for its HomeHub bundled plans.

Meanwhile, StarHub is acquiring a 60% stake in HKBN Ltd’s (SEHK: 1310) information and communications technology (ICT) entities in both Singapore and Malaysia.

HKBN, or Hong Kong Broadband Network, is an internet and telecommunications company headquartered in Hong Kong.

This acquisition is projected to boost the group’s ICT revenue from the current S$57 million to S$143 million for 9M2021.

There is also potential for further cost savings through the consolidation of office and warehouse spaces along.

The deal will also allow StarHub to broaden its customer base to new sectors and geographies and give the group the ability to cross-sell its services.

With their enormous potential for gains and sustainability, no other sectors can beat these 2 trends in 2022. If you’re a growth investor, jumping early into these industries means you’ll never have to worry about running out of stock ideas. Our investing team has prepared a FREE webinar, where they will dive deep into 2 hot trends for 2022. Click HERE to register for free now.