We look at the recent changes in the bellwether index and review the interest rate changes made by the three local banks. 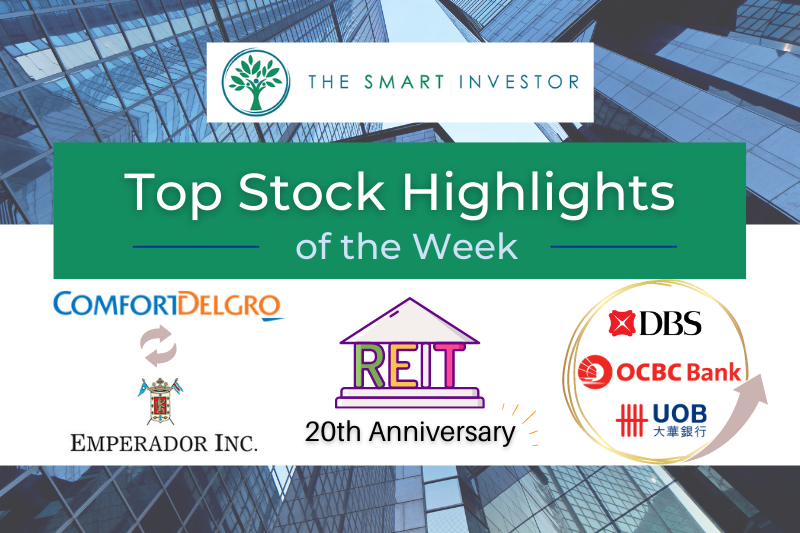 Welcome to the latest edition of top stock highlights where we bring you the latest updates on corporate news and other interesting business snippets.

In its regular quarterly review of the Straits Times Index (SGX: ^STI), index leader FTSE Russell, a unit of the London Stock Exchange Group (LON: LSEG), announced one change to the constituents.

ComfortDelGro Corporation Limited (SGX: C52), the land transport giant with a total fleet size of more than 34,000 buses, taxis and rental vehicles, will be dropped from the bellwether index.

In its place, Emperador Inc (SGX: EMI) will be slotted into the index.

Emperador operates an integrated alcohol business, manufacturing, bottling and distributing distilled spirits and other alcoholic beverages from the Philippines and Europe.

Its product portfolio comprises a mix of domestic and foreign brands such as Emperador Light, Andy Player Whisky, Smirnoff Mule, and Fundador, among others.

The STI Reserve list has the five-highest ranking non-constituents by market capitalisation.

Time flies, and in the blink of an eye, it’s been 20 years since the first Singapore REIT (S-REIT) was listed on our shores.

The REIT Association of Singapore (Reitas) organised an event to celebrate this milestone, and Singapore Exchange’s (SGX: S68) CEO Loh Boon Chye noted that the S-REIT sector continues to be one of the fastest-growing in Asia.

S-REITs form the second-largest REIT market outside of Japan, with a total of 43 REITs with a market value of more than S$111 billion, making up close to 12% of the market capitalisation of all SGX stocks.

The very first REIT, CapitaMall Trust, was listed on the Singapore market back on 17 July 2002.

There may be more REIT listings coming up, with Mapletree Investments Pte Ltd said to be mulling a potential initial public offering of its student accommodation assets that could raise US$1 billion.

The race is heating up for the banks as they rush to raise deposit rates to stay competitive.

United Overseas Bank Ltd (SGX: U11), or UOB, became the third and final bank to raise the deposit rates on its One Account.

Its maximum rate was raised to 3.6%, up from the promotional rate of 3% introduced at the beginning of August.

Of course, these rates do come with a slew of terms and conditions that include the crediting of your salary to each of these bank accounts or attaining a minimum spend on select credit and/or debit cards.

It’s clear, though, that this jostling for deposits can only benefit the end customer as interest rates continue rising.

Investors should be glad to know that all three banks are set to enjoy higher net interest income in the coming quarters as they reprice their loans in line with higher interest rates.