So You Want to Become a Long-Term Investor 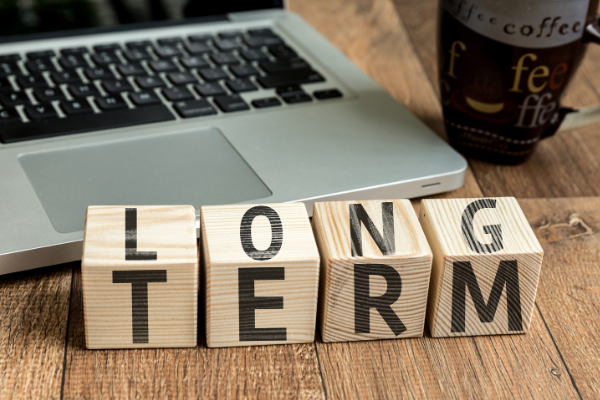 As an investor, finding and buying a great stock is just the first step.

But simply purchasing shares of an outstanding business or company does not guarantee that you will make money out of it.

If you fail to hold this stock for the long term, you are unlikely to realise its full potential.

Yet, most of the attention is focused on what stock to buy.

Far fewer words are written on what’s more important: holding the stock for the long term.

So, let’s correct this shortfall today.

Don’t just do something, sit there

“All of humanity’s problems stem from man’s inability to sit quietly in a room alone.”
— French philosopher Blaise Pascal

There is nothing particularly special about holding a stock for many years.

All you have to do is to, well, do nothing.

But sitting around without taking any action can be harder than it looks.

Take Netflix (NASDAQ: NFLX), a stock that I have owned for more than 14 years.

Over this timeframe, shares of the online streaming giant have gained well over 150 times, a handsome return by any measure.

However, if you think that holding Netflix for 14 years was easy, think again.

Between 2007 and 2020, shares of Netflix have plunged by 20 per cent or more, from peak to trough, in all but two years. To add to that, there were seven years where shares sank 30 per cent or more, as shown in the diagram below. 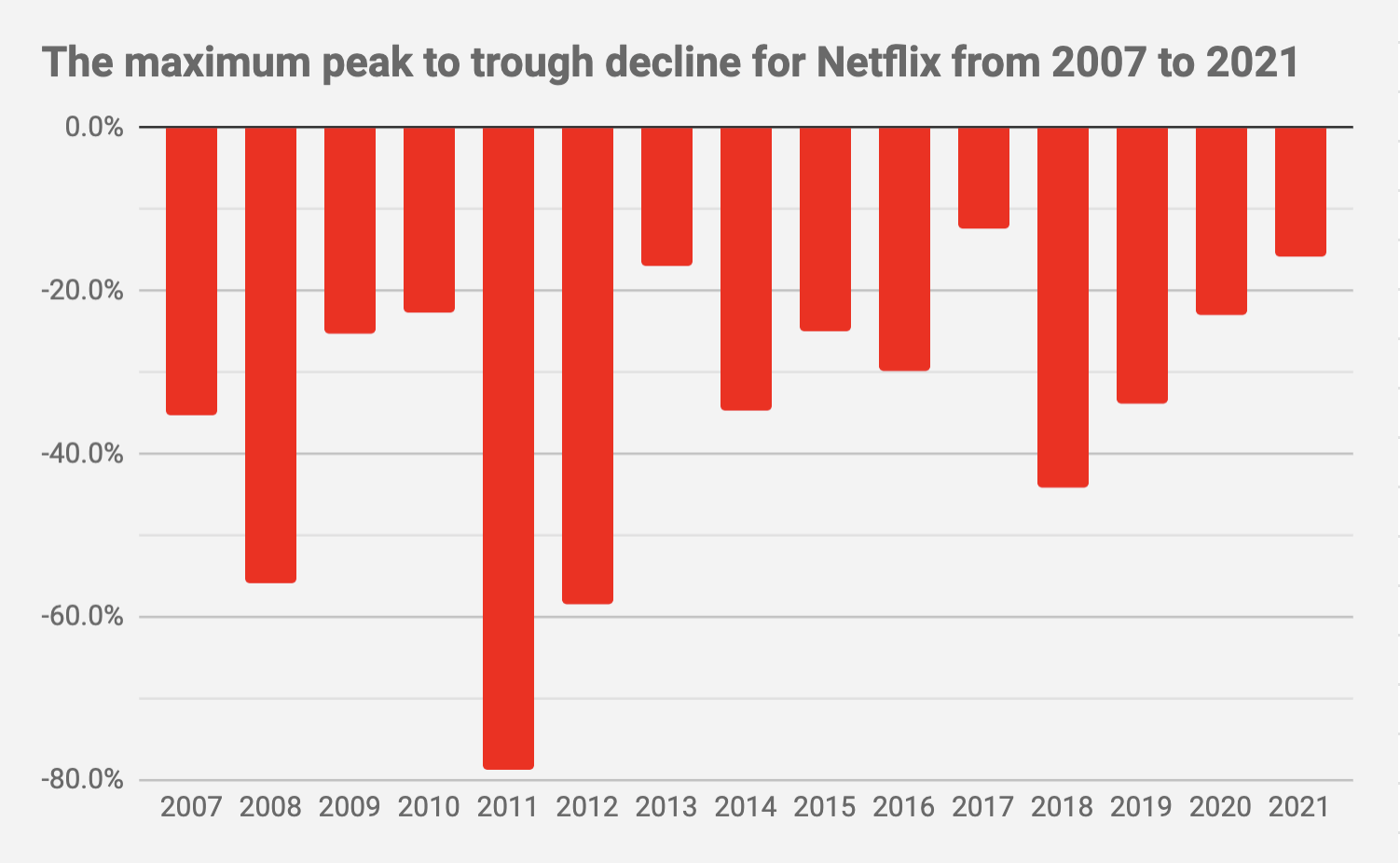 To top it off, Netflix shares fell by nearly 80% in 2011 when it made a mess of its transition from a DVD-by-mail service to online streaming.

By splitting these two services into separate payment plans, the subscription price for the new DVD and streaming bundle rose by 60%, angering its membership base.

Thankfully, Netflix CEO Reed Hastings owned up to his mistake a month later and rolled back the changes.

Today, a decade later, we can say Hastings’ decision to pivot to online streaming has paid off in spades.

At the end of 2020, Netflix had amassed over 200 million paid subscribers, a feat that was unlikely to be achieved through its original DVD-by-mail business.

But for investors, there were moments of heartburn to endure even when you believe in where the company was headed.

Netflix is not the only winning stock that stumbled along the way.

Walmart (NASDAQ: WMT), a retailing behemoth with close to US$560 billion in annual sales, has been a huge winner for investors since its shares started trading in 1972.

Yet, like Netflix, the retailer had its own moments when the situation looked uncertain.

In particular, Walmart’s founder, the late Sam Walton, admitted that he made a major mistake while trying to hand over the company’s reins to his successor, Ron Mayer.

In his biography, the late Walton recounted the agonising moment in 1976 where he decided to take back his role as Walmart chairman and CEO less than three years after handing the reins to Mayer.

As a result, the late Walton had to ask Mayer to step down and accept another role.

The offer was unacceptable to Mayer and he chose to leave, sparking a massive exodus at Walmart’s management team. By the late Walton’s estimate, around a third of its senior management team had left by the time the dust settled.

In the company’s lore, the incident became known as the “Saturday Night Massacre”.

For the investors at Wall Street, the situation looked grim.

Given the sequence of events, the late Walton’s leadership was called into question.

And it is at this dire moment that he offered a telling insight.

As Wall Street honed in on these problems, he noted that they readily ignored all the basics and principles at Walmart that made the company great in the first place.

For instance, the company always had a relentless drive to keep costs low. Walmart also spent time teaching its associates how to take care of its customers.

Ultimately, despite all its troubles, Walmart had lost none of the qualities that kept its customers coming back to its stores.

But Wall Street analysts were too preoccupied with the negatives and failed to see the positives.

Lessons for the long run

Firstly, all great companies that become winning stocks will stumble somewhere along the way.

We have seen the examples of Netflix and Walmart where their well-respected leaders made some sizable errors along the way.

To err is human.

I would further venture that in my 15 years as an investor, I have yet to see a big winning stock that did not make its fair share of mistakes along the way.

Secondly, when a great company encounters problems, always remember what made it a great business in the first place.

The late Walton’s observation above points to a strong tendency among investors to forget the positive things a company has achieved over many years due to a single negative event that is dominating the headlines.

Thirdly, be ready to give the benefit of the doubt when things do not work out as planned.

To use an analogy, when a football team loses, their mistakes that led to the loss will be laid bare. But if you are a fan of a football team, it is unlikely that you will give up on your favourite team after a single loss or even a few losses.

Similarly, don’t be too quick to give up on your favourite company just because of a few bad quarters.

If a company has been performing well for years, surely the management team has earned your patience and time for them to right the ship.

Get Smart: Don’t shortchange yourself

Not all stocks that are held for the long term work out the way we want.

There will be times when our trust in the management team is misplaced and our patience in holding the company’s stock does not bear fruit.

Under such circumstances, it may seem like holding a losing stock for too long is a terrible mistake.

But I would argue that the worst mistake you can make is when you sell a winning stock too early.

After all, the maximum you can lose on a stock is 100 per cent, which in itself is unlikely to happen if you have strong stock-picking criteria in place.

On the other hand, if you sold Netflix in early 2007, you would have missed out on 15,000 per cent in gains — a magnitude of stock returns which you will be hard-pressed to find again.

As such, my default stance has been to find great companies with great management teams.

But that is not enough.

Holding a great stock for the long term is what turns a good idea into great returns.

I invite you, dear investor, to do the same as well.