Year in Review: 5 Companies That Raised Their Dividends in 2022

These five businesses have managed to raise their dividend payouts during a difficult year. 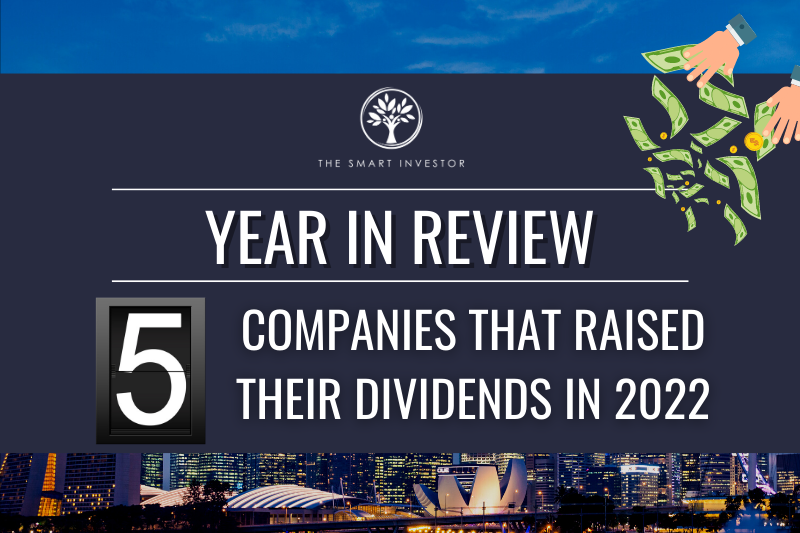 As dividend investors, one thing we look forward to is receiving a larger paycheck than the year before.

To do so, we need to be able to identify good dividend stocks that can increase their dividends consistently over time.

This will help to increase your passive income stream over time without having to invest more capital.

A higher dividend yield does not make a stock a more attractive investment in the long run if the company is unable to sustain its dividend payments.

Instead of focusing solely on dividend yield, investors should also pay attention to a company’s revenue, net profit and free cash flow.

After all, it is the company’s financial performance that determines whether it can continue to raise its dividends consistently in the long run.

Here are five companies that have increased their dividends in 2022.

AEM Holdings is a testing and handling solutions provider for semiconductor and electronics companies.

Its customers are involved in the advanced computing, 5G and artificial intelligence (AI) markets.

Amidst strong demand for AEM’s technology and equipment, management has also maintained its fiscal year 2022 (FY2022) revenue guidance of between S$820 million and S$850 million.

Moving forward, AEM is expected to continue its strong performance in the years ahead.

According to IC Insights, the semiconductor market is projected to grow to US$1 trillion by the early 2030s.

The demand for end-user devices is driven by the rapid adoption of 5G, artificial intelligence, Internet of Things (IoT), cloud and automotive.

Coupled with increasing device test times, this will contribute to the secular growth in test spend, a market where AEM is the global leader.

DBS is the largest local bank in Singapore.

Investors of DBS were rewarded with much higher dividends at S$1.08 in 9M2022.

Comparatively, DBS gave a dividend of S$0.84 in the same period last year.

Against the backdrop of rising interest rates, the bank expects its net interest margin (NIM) to reach around 2.25% by mid-2023.

Management has also guided for a double-digit growth in fee income in 2023.

Following closely behind is the second largest bank OCBC.

When it came to its financial performance, OCBC did not disappoint as well.

Income growth was largely driven by a higher NIM of 2.06% during the quarter.

In line with the stronger performance, OCBC declared an interim dividend of S$0.28, 12% higher than S$0.25 paid out the year before.

HRNetGroup is a leading recruitment and staffing company with on-site recruiters across 14 cities.

The group owns a total of 12 brands such as HRNetOne, Recruit Express and PeopleSearch.

On a positive note, the number of contractor employees rose 11.7% year on year to 17,954 as more companies switched to short-term contracts.

Taken together, revenue for HRNetGroup increased by 14.2% to reach S$314.2 million.

With the job vacancy to unemployed person ratio increasing in recent years in Singapore, businesses’ demand for talent will likely remain strong.

With a share price of S$0.77, shareholders of the company have been rewarded with a dividend yield of 8%.

Aside from its cleanroom and nitrile healthcare gloves, the company also produces finger cots, packaging materials and face masks.

For 3Q2022, Riverstone reported a 58.6% year on year decrease in revenue to RM 270 million amid the normalisation of healthcare glove demand as more economies start to reopen.

Despite this, CEO Mr Wong Teek Son has emphasised that the cleanroom segment has shown resilience over the years, given the company’s market leadership in this industry.

This is thanks to the company declaring a second interim dividend of RM 0.06 for 3Q2022.