We explore the implosion of a cryptocurrency exchange and Warren Buffett’s latest purchase. 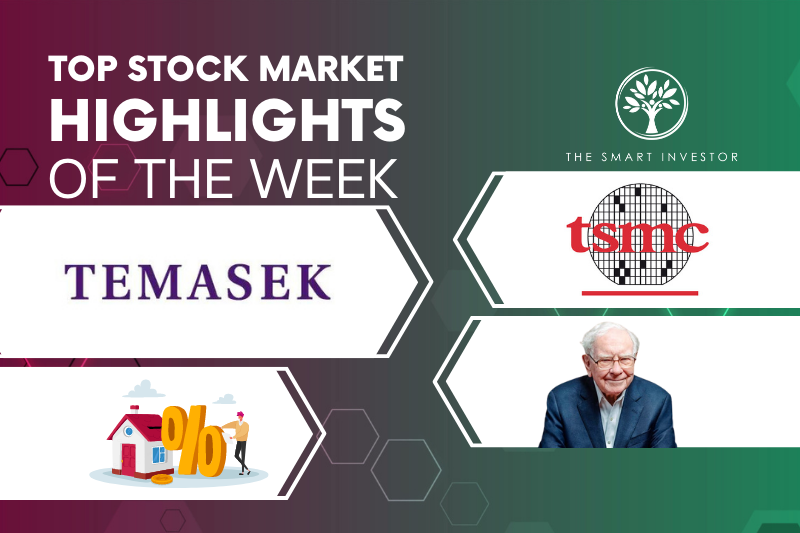 Welcome to the latest edition of top stock market highlights.

Investment firm Temasek Holdings has been affected by the implosion of popular cryptocurrency trading firm FTX.

FTX was one of the world’s largest cryptocurrency exchanges before it sought bankruptcy protection last week.

Its CEO and founder, Sam-Bankman Fried, has also resigned.

Temasek has released a statement confirming that it will write down its entire US$275 million investment in FTX, regardless of the outcome of the latter’s bankruptcy filing.

The US$275 million investment was made in two separate tranches between October 2021 to January 2022 for a 2.5% stake in the cryptocurrency outfit.

It also clarified that it did not invest directly in cryptocurrencies.

The due diligence process for FTX was extensive and lasted approximately eight months, during which Temasek reviewed the cryptocurrency exchange’s audited financial statements and spoke to numerous people familiar with FTX and its operations.

Temasek’s rationale for investing in FTX is based on its belief that cryptocurrency exchanges form a key part of the global financial system.

Hence, its thesis involved gaining exposure to the crypto markets indirectly through a fee-based model with no trading or balance sheet risk (as no direct investment in any cryptocurrency was made).

Early-stage investments in such nascent companies make up just 6% of its entire portfolio.

It’s been a tepid period for the semiconductor industry as chip makers have downgraded their revenue forecasts in light of slowing demand.

The COVID-fuelled boom had initially led to a chronic undersupply situation as many chip makers ramped up production aggressively to tackle the shortage.

The pendulum has now swung to the other extreme.

Chip makers such as Micron Technology (NASDAQ: MU) are scaling back on their capital spending plans for 2023 while clearing excess inventory.

Amid the gloom, one of the world’s best investors, Warren Buffett, has taken an opposing view.

The Oracle of Omaha, as he is sometimes called, has scooped up US$5 billion worth of Taiwan Semiconductor Manufacturing Company (NYSE: TSM), or TSMC for his conglomerate Berkshire Hathaway (NYSE: BRK.B).

Berkshire disclosed that it acquired around 60 million American Depository Receipts (ADRs) of TSMC for the quarter ended 30 September 2022.

TSMC is the world’s leading chip maker and counts technology giants such as Apple (NASDAQ: AAPL) as its clients.

It also manufactures semiconductors for clients such as Nvidia (NASDAQ: NVDA) and Qualcomm (NASDAQ: QCOM).

Whether Buffett’s bet on TSMC will work out or not remains to seen, but investors should remember that his investments are typically long-term and that he is giving a vote of confidence to semiconductors.

As the US Federal Reserve raises its benchmark rates further, the local banks have also hiked their mortgage rates northward.

It’s the second time in as many months that home loan interest rates have increased.

Back then, DBS Group (SGX: D05) had fired the first salvo by raising its four fixed-rate loan packages to 3.5%.

Not to be outdone, United Overseas Bank Ltd (SGX: U11), or UOB, raised its two and three-year fixed rate home loan packages to 3.75% and 3.85%, respectively.

This round, the banks have bumped up their fixed rate loans to as high as 4.5%.

DBS’ four fixed-rate loan packages are all set at 4.25% while OCBC’s one and two-year fixed rate mortgage loans are priced at 4.3%.

UOB now has the highest rates of the trio, with its two-year package fixed at 4.5%.

With the latest increase, homeowners that need to refinance are left in a quandary.

They can choose a floating-rate loan such as the one DBS Group is offering. It is priced at 1% above the three-month compounded Singapore Overnight Rate Average (SORA) which is currently at 2.663%.

The problem is that any further increases in SORA will then bump up the floating up without the borrower being able to refinance.

And it looks increasingly like the US central bank is committing to further hikes to stub out high inflation.

Yet, if the same homeowner chooses a fixed rate package, he or she stands to pay substantially more than in interest payments compared to a year ago.

It’s not an easy choice, but perhaps these homeowners can park some of their spare cash in shares of DBS Group to somewhat offset the higher interest.

The lender’s shares are offering a trailing 12-month dividend yield of 4% right now.