This week, we look at a technology company and a luxury goods retailer as well as the latest batch of private equity bonds from Astrea. 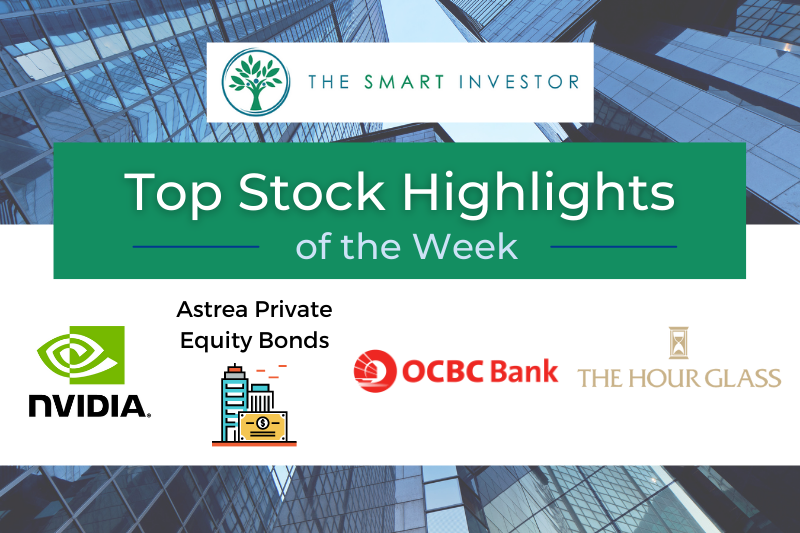 Welcome to the latest editions of top stock highlights where we feature interesting snippets from various companies and other business events.

The technology company guided for US$8.1 billion in revenue for its fiscal 2023 second quarter, representing a year on year growth of 24.6%.

This estimate accounts for a US$500 million revenue reduction resulting from China’s COVID-19 lockdowns as well as the Russia-Ukraine war.

CFO Colette Kress said that the company will slow down its hiring to deal with a more challenging macroeconomic environment and that gaming revenue will decline in the current quarter.

Nvidia is slated to release its latest graphic card lineup in the coming months called the RTX 4000-series which should, hopefully, provide a boost to the company’s top and bottom lines.

Azalea is a wholly-owned subsidiary of Seviora, which is indirectly owned by Temasek Holdings.

For this round, retail investors will also have access to the Class B bonds which pay out a coupon of 6% per annum.

However, it’s worth noting that this tranche of bonds has a higher credit risk profile and ranks behind Class A bonds in terms of priority of repayment.

What this means is that should a default occur, Class A bondholders are first in line to receive repayment, while Class B bondholders will only get paid if there is any excess.

These bonds saw strong demand from the public, with the retail portion of the Class A-1 bonds being three times over-subscribed.

Both Astrea VII Class A-1 and B bonds will be issued on 27 May and will start trading on the SGX on 30 May.

The Monetary Authority of Singapore, or MAS, Singapore’s central bank, delivered a slap on the wrist to OCBC for its handling of SMS phishing scams in December last year.

The lender will be required to stump up an additional amount of S$330 million in regulatory capital.

The imposition of this requirement means that OCBC will have less liquid capital with which to deploy into investments.

This additional capital requirement takes into account the bank’s efforts to strengthen internal controls and its response to customer feedback to resolve its problems.

OCBC CEO Helen Wong acknowledged that the bank could have done better to respond to the unprecedented scam tactics, but concluded that there was no breach of the bank’s IT systems.

Investors will be pleased to know that MAS’ additional requirements will not affect the bank’s dividend policy.

The Hour Glass reported its fiscal 2022 (FY2022) earnings for the fiscal year ended 31 March 2022 with an impressive set of numbers.

The luxury retailer generated S$208.4 million of free cash flow, and a final dividend of S$0.06 per share was declared, higher than the S$0.04 paid out a year ago.

The better performance was due to higher consumer demand for mechanical watches, with interest reaching new sets of younger and highly discerning watch enthusiasts and buyers.