We review an electric vehicle manufacturer’s latest earnings, take a look at Apple’s latest iPhone launch, and dig deeper into the highest bank deposit rates in more than two decades. 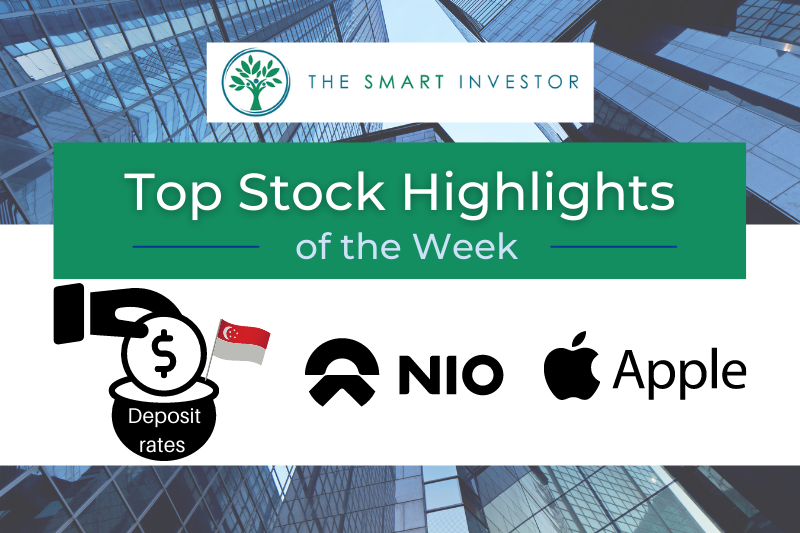 Welcome to the latest edition of top stock highlights where we write on the latest business events and earnings.

Along with surging global interest rates, the trio of local banks has also jacked up its deposit rates to keep up.

Promotional interest rates on Singapore dollar (S$) fixed deposits have hit as high as 2.8% for a 24-month tenor.

At this level, the rate slightly surpasses the 2.6% one-year return for the latest Singapore Savings Bond.

United Overseas Bank Ltd (SGX: U11), or UOB, is offering an attractive interest rate of 2.6% on its one-year S$ fixed deposit.

However, due to a large surge in customers, the bank has imposed a limit of five fixed deposit placements per customer.

OCBC Ltd (SGX: O39) wasn’t far behind as it offered a 2.3% interest rate for the same product with a similar tenor.

DBS Group (SGX: D05), Singapore’s largest bank, has, however, kept its highest rate at 1.3% but this could change as its peers up their deposit rates to attract more funds.

Although deposit rates are on the rise, investors should still feel confident that the lenders’ net interest margin will expand as new loans can be priced at much higher rates.

Nio is a Chinese electric vehicle manufacturer that produces smart electric vehicles and invests in innovative charging solutions with its headquarters and global R&D centre located in Shanghai.

The company released its earnings and delivery update for the second quarter of 2022 (2Q2022).

Total revenue increased by 21.8% year on year to RMB 10.3 billion for the quarter.

Gross margin, however, dipped from 18.6% in 2Q2021 to 13% due to an increase in delivery volume and higher material costs per vehicle.

Operating loss more than tripled year on year to RMB 2.8 billion as expenses such as research and development and selling costs surged higher.

As of 30 June 2022, the electric car manufacturer had RMB 24.5 billion of cash along with RMB 30.5 billion of short and long-term investments.

It’s that time of the year again for the world’s most valuable technology and smartphone company.

Yes, I am talking about Apple’s annual launch event where the Californian company will announce a slew of new products along with attractive new features.

This year was no different as the trillion-dollar company unveiled its latest iPhone 14 model along with new Airpods and Apple Watches.

Let’s start with the new iPhone.

Apple introduced the capability for the smartphone to send a call for help via satellite during an emergency by putting together a system that works with emergency responders in remote areas.

Users can even use Apple’s FindMy app to share their locations via satellite in case they have no internet connectivity, with GlobalStar Inc (NYSE: GSAT) being Apple’s satellite operator for the latter’s emergency SOS service.

The iPhone 14 retails at US$799 while the iPhone Plus sells at US$899, with pre-orders starting September 9.

Meanwhile, the new Apple Watch includes an upgraded budget model called the SE and a Series 8 Watch that boasts crash detection and a low power mode that enables the battery to last for 36 hours.

What’s more, this Series 8 Watch comes with a temperature sensor that can retroactively detect ovulation, allowing couples to increase their chances of having a baby.

Finally, Apple’s new Airpods also have better sound quality and clarity because of a new H2 chip, an upgrade from its previous H1.

New features include a new touch control to adjust volume and longer battery life with up to six hours of listening time.

Going by history, Apple’s new products are usually met with enthusiastic fanfare as its legion of fans queue up to be the first to get their hands on the technology company’s innovative and sleek devices.