We look at rising mortgage rates and savings bond interest rates and also discuss the development of Singapore’s new port. 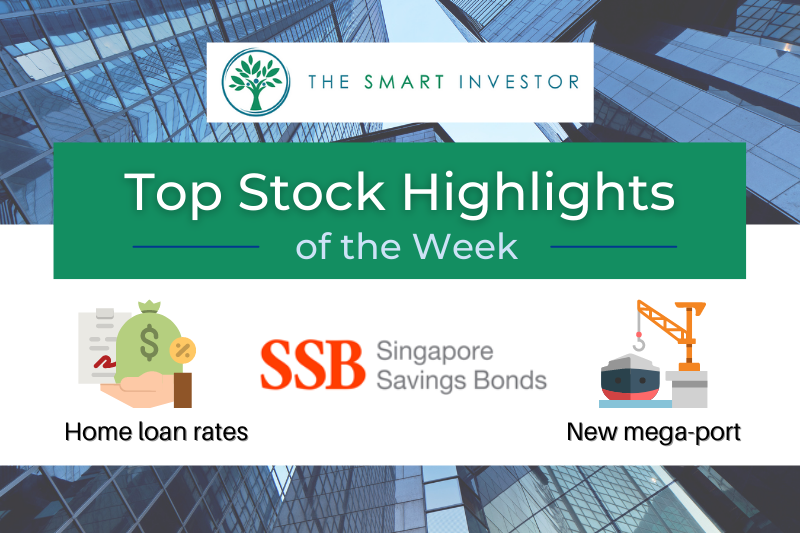 Welcome to the latest edition of top stock highlights where we look at interesting news events and corporate snippets.

Home buyers and owners should be prepared to pay higher interest as local banks have begun to raise interest rates on mortgage loans for HDB flats.

The move is in line with the US Federal Reserve’s recent 0.75 percentage point hike in interest rates last month.

Last Tuesday, Singapore’s largest bank, DBS Group (SGX: D05), raised the rate for all its fixed-rate loans to 2.75% per annum, up from the previous 2.45% and 2.6% for two and three-year fixed loans, respectively.

The lender also scrapped its five-year fixed-rate plan that was priced at 2.05% per annum.

United Overseas Bank Ltd (SGX: U11), or UOB, was the most aggressive, hiking its mortgage loan rates past 3%.

The bank raised the interest on its three-year fixed package to 3.08%, up from 2.8% previously.

OCBC Ltd (SGX: O39) has followed its counterparts in raising rates on its fixed-rate mortgages, with its two-year fixed rate package increasing to 2.98% per annum.

Borrowers may be faced with higher financing costs in the future as the Federal Reserve plans to increase rates further later this month as well as in September, November and December.

Economists expect the Federal Funds rate to end the year at between 3.25% and 3.5%, implying that there may be more room for banks to increase their loan rates further.

If you are looking to earn some returns with little risk, the Singapore Savings Bond, or SSB, is now offering a 10-year average return of 3% for its August issue.

This is the highest level recorded for the SSB since the peak of 2.78% back in November 2015.

The higher interest rates are reflective of the increase in the Federal Funds Rate as highlighted above.

The first-year interest rate for the next batch of SSB stands at 2%, and the maximum amount offered is capped at S$700 million.

The first interest payment will be made on 1 February 2023, with subsequent payments made on 1 August and 1 February until maturity.

As a recap, the minimum investment amount per person for the SSB is S$500 and the maximum is S$200,000. Investment sums should be in multiples of S$500.

These bonds are fully backed by the Singapore government which has received the strongest “AAA” credit rating from international credit rating agencies.

Singapore is advancing on its plan to construct the world’s largest automated port by 2040.

The S$20 billion project will double its existing space and will tap on the use of drones and autonomous vehicles.

Operations began at two new berths last year and construction work is continuing on the next phase now.

The government began allocating funds in 2013 to reclaim land for the new port in Tuas with plans to eventually double its capacity to 65 million twenty-foot equivalent (TEU) by 2040.

This move appears wise in hindsight as the world grapples with supply chain issues brought about by the pandemic, as the expansion has provided much-needed space for the efficient running of operations.

Once Tuas is completed by 2027, the existing three terminals at Tanjong Pagar, Keppel, and Brani will shut and shift over.

The port handles the most trans-shipped cargo in the world in 2020, and its strategy is to position itself as a one-stop-shop for ships to carry out all their needs such as banking, refuelling, and unloading of cargo, and storage.

This is all good news for the country as it gears itself up for the next phase of growth in the post-pandemic era.