We bring you highlights from two growth stocks and two REITs. 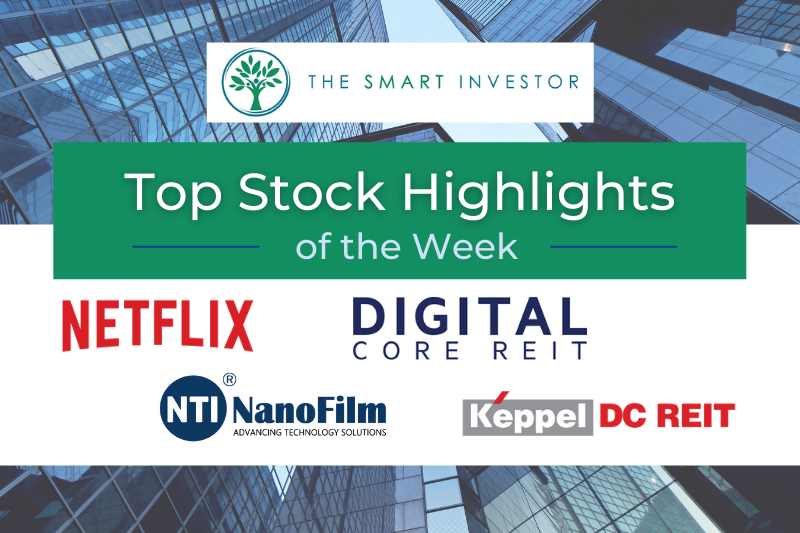 Welcome to the latest edition of top stock highlights where we feature snippets from corporate earnings or announcements.

The company had released its fiscal 2022 first quarter (1Q2022) earnings which disclosed that it had lost 200,000 members compared to the previous quarter.

It was Netflix’s first-quarter on quarter subscriber decline in a decade.

Part of the reason was due to the company suspending its service in Russia due to the Russia-Ukraine war.

The pullout from Russia cost the company 700,000 members, so if this was adjusted for, Netflix would have seen additions of 500,000 instead.

Despite this drop, revenue rose 9.8% year on year to US$7.87 billion while free cash flow increased from US$692 million a year ago to US$802 million.

However, Netflix has guided for weaker subscriber numbers moving forward — it estimates that membership will fall by two million in 2Q2022.

The data centre REIT has maintained full occupancy as of 31 March 2022 with a portfolio worth US$1.46 billion.

Revenue for 1Q2022 was flat against its forecast, but net property income was around 7% higher due to lower than expected property expenses.

As a result, distributable income to unitholders was 1.9% higher than forecast at US$12.1 million.

DCR did disclose, however, that its fifth-largest customer, a privately-held IT service provider, had filed for bankruptcy protection this month.

The customer remains current with rental payments and the manager expects to be able to find an alternative tenant should this customer reject the lease.

DCR’s sponsor, Digital Realty Trust (NYSE: DLR), has agreed to guarantee the cash flow to DCR if there is a cash flow shortfall.

The REIT manager has assured us that this event will not negatively impact distribution per unit (DPU).

Nanofilm announced its 1Q2022 business update and disclosed a healthy set of numbers.

Group revenue rose 27% year on year with growth across all its business units (BU).

Advanced Materials BU, which made up 81% of total revenue, saw demand driven by the wearables and accessories, and automotive segments.

The group is also seeing new applications for the automotive segment such as fuel injection systems, battery connectors and other car parts.

The Industrial Equipment BU made up 14% of total revenue while Nanofabrication BU took up the remainder.

Nanofabrication has a strong pipeline of projects for sensory components and lenses from major global customers and is confident of tapping into this large addressable market.

Meanwhile, Industrial Equipment is also set to grow in line with the increased industrial production capacity of its customers along with new designs and solutions for coating equipment for the solar energy industry.

For the quarter, gross revenue dipped slightly by 0.9% year on year to S$66.1 million.

Net property income slid by 1.4% year on year to S$60.1 million, mainly due to provisions made for a client payment under dispute at a Singapore data centre as well as higher electricity costs.

The REIT has disclosed that based on current contracts, a further 10% increase in electricity tariffs would impact DPU by around S$0.00009 per unit.

Keppel DC REIT continues to sport moderate leverage at 36.1% with a low average cost of debt at 1.8%.

Through proactive leasing efforts, the REIT has secured new, renewal and expansion leases in Dublin, Malaysia and the Netherlands.

Demand for data centres is expected to remain robust, driven by an increase in cloud computing, accelerated cloud migration, and increased digitalisation.