We look at the latest happenings with two US-listed growth stocks and a hospitality trust. 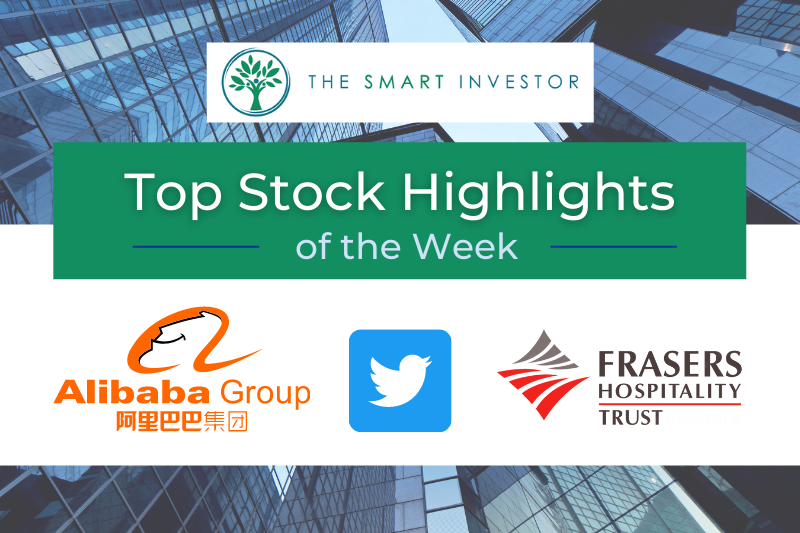 Welcome to another edition of top stock highlights where we bring you interesting snippets from company announcements or events.

In a surprise regulatory filing, Daily Journal Corporation (NASDAQ: DJCO) disclosed that it had halved its stake in Chinese e-commerce company Alibaba Group.

These shares are worth around US$28.6 billion at Alibaba’s recent share price of US$95.49.

Charlie Munger, 98, has been the chairman of Daily Journal for 45 years before stepping down just last month, where he would remain a director that still oversees the company’s investment portfolio.

Alibaba had reported a mixed set of earnings for its latest quarter.

The e-commerce company does boast a large consumer base in China, though.

In the 12 months ended 30 September 2021, Alibaba had 953 million annual active consumers in China, with retention rates averaging 97% for customers who spent more than RMB 2,000.

It was just a week ago when we wrote about Elon Musk’s surprise move to purchase a 9.2% in messaging company Twitter.

Back then, the CEO of electric car company Tesla (NASDAQ: TSLA) was offered a seat on the board of directors.

But Musk rejected the position.

This week, we found out why.

Now, in another twist to the tale, the effervescent Musk has announced a US$43 billion offer to buy Twitter.

He is offering US$54.20 per share apiece for the company, a 38% premium to its last traded price before his stake was made public.

Tesla’s CEO believes that the social media company needs to be taken private for important changes to be made, and feels that Twitter will not thrive in its current form.

However, Musk did state that he would “reconsider his investment” should Twitter’s board of directors reject it.

He has long been critical of the social media business but some investors were concerned that his offer price could be undervaluing the company.

In the last seven years, Twitter has only been profitable in FY2018 and FY2019, with the other five years registering net losses.

There was recent speculation that Frasers Hospitality Trust, or FHT, may be taken private.

Bloomberg had reported that the hotel and serviced residence trust is considering a plan to go private and that it had received board approval to explore such an outcome.

In addition, the trust had supposedly also hired a financial adviser.

FHT has released an announcement stating that it reviews strategic options from time to time intending to unlock value for unitholders.

However, there is no certainty that any transaction will result, and that no written proposals have been received or decisions taken in this regard.

Investors may be heartened to know that Singapore had recently extended quarantine-free entry.

This move should help to restart tourism, a sector that was badly battered during the pandemic, with positive effects on the hospitality sector.

FHT stands to benefit from the influx of tourists and should see better numbers ahead as borders reopen and economies start to recover.