We look at the earnings for a retail REIT, a technology growth stock and one of the largest conglomerates in the US. 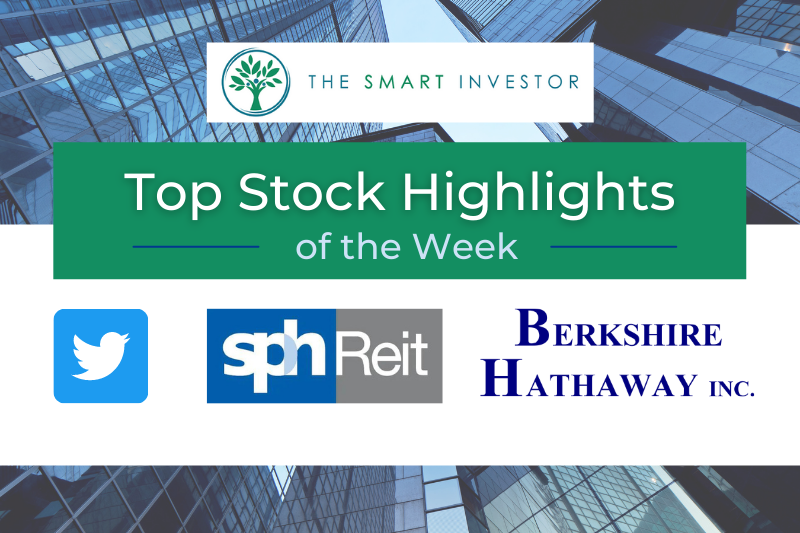 Welcome to another edition of top stock highlights where we feature snippets from interesting corporate announcements or events.

The REIT’s portfolio remained resilient with the occupancy rate staying higher at 98.4%.

SPH REIT’s interest coverage ratio stayed healthy at 7.7 times, with 73% of its debt on fixed rates, providing the REIT with a good buffer against rising interest rates.

The REIT has a right of first refusal on two retail properties held by its sponsor, Singapore Press Holdings.

One of them, Seletar Mall, opened in 2014 and has maintained high occupancy.

The other property, Woodleigh Mall, is currently under construction.

Aside from these two properties, SPH REIT intends to explore other acquisition opportunities to increase DPU for unitholders.

This detail was disclosed in a 13G filing by Twitter recently, which states that Musk owns a total of 73,468,938 shares.

This stake is worth around US$3.5 billion, according to Twitter’s closing price of US$48.03.

When this news was disclosed, shares of Twitter shot up 27% as investors were optimistic that this stake may lead to something more.

Musk himself is a frequent user of the service and has sent many messages using its platform, some of which have landed him in hot soup over the years.

The 9.2% stake has led to Musk being named the top shareholder of Twitter, and the company has also included him on the board of directors.

However, as he is now a director of the company, he is not allowed to accumulate a stake of more than 14.9% of Twitter’s stock.

Changes are afoot, though, with Musk putting out a poll on Twitter asking users if they want an edit button.

The company has confirmed that it is indeed working on such a feature and will be testing out the idea in the coming months.

Berkshire Hathaway, the conglomerate helmed by famous investor Warren Buffett, has been busy this year.

This week, the company disclosed that it had purchased 121 million shares, or an 11.4% stake, of HP Inc (NYSE: HPQ), a technology company that manufactures laptops and printers, for around US$4.2 billion.

This stake is Berkshire’s third big investment this year, even though Buffett had quipped in his annual shareholder letter that nothing excited him in the equity markets.

In the same month, Berkshire also agreed to purchase Alleghany Corporation (NYSE: Y), adding the company to its list of insurance companies.

It’s been a long drought for Berkshire as it had gone six years without a major acquisition.

However, it looks as though Buffett is now on the prowl for more acquisitions, as evidenced by the three acquisitions made in as many months.

There could be more such acquisitions for investors to look forward to in future, even as shares of Berkshire climb nearly 15% year to date.

In contrast, the bellwether S&P 500 Index has declined by 6.2% year to date while the technology-heavy NASDAQ Composite Index has fallen 12.2% over the same period.