We look at earnings from a semiconductor and consumer goods company and also the latest happening with Elon Musk and Singapore’s inflation rate. 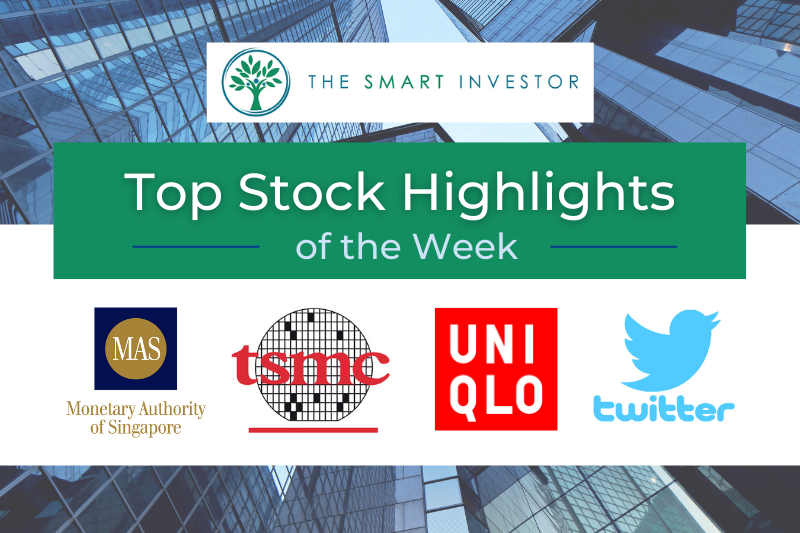 Welcome to the latest edition of top stock highlights where we bring you snippets from interesting news and corporate events.

Monetary Authority of Singapore and inflation

The Monetary Authority of Singapore (MAS), Singapore’s central bank, has taken another step to tighten its monetary policy to rein in inflation.

In May, Singapore’s core inflation rate hit a 13-year high of 3.6%, with overall inflation hitting 5.6%, led by rising prices for food and utilities.

The MAS uses the exchange rate as its main policy tool and will re-centre the mid-point of the Singapore dollar nominal effective exchange rate to allow the currency to appreciate.

This is the fourth time since October 2021 that the central bank has tightened its policy, with the usual practice being twice yearly.

Core inflation for Singapore is projected to rise above 4% in the near term but should settle within the 3% to 4% range for 2022.

For 2Q2022, high-performance computing took up the lion’s share of revenue at 43%, with smartphones coming in a close second at 38%.

The company approved a cash dividend of NT$2.75 per share for its first quarter and has guided revenue to be in the range of US$19.8 billion to US$20.6 billion for its third quarter.

Taking the mid-point of this range means that TSMC should enjoy a 35.8% year on year jump in revenue.

Fast Retailing, which owns the apparel brand Uniqlo, reported a decent set of earnings for its fiscal 2022’s third quarter ended 31 May 2022.

For the quarter, its International division’s revenue and operating profit took up 45.4% and 39.6% of the group’s total, respectively.

Fast Retailing has forecasted a final dividend of JPY 340, up nearly 42% year on year from the JPY 240 paid out last year.

Amid COVID restrictions, CFO Takeshi Okazaki has assured investors that sales to China, Hong Kong and Taiwan have recovered from June as these countries have eased their COVID-19 restrictions.

However, the Japanese Yen’s depreciation is making production costs more expensive, leading the company to declare an increase in prices in Japan for its popular fleeces.

It also warned that more price increases could be on the way to offset inflationary pressures.

There has been a further twist to the Twitter saga.

Recall that it was just three months ago when Musk made an audacious bid to buy over and privatise Twitter so that “important changes” could be implemented.

Now, the billionaire is claiming that Twitter has misled him over the number of spam bots on its network and that the company has not complied with its contractual obligations.

Unsurprisingly, Twitter’s board responded that it will pursue legal action to enforce the merger agreement.

There may be further twists and turns before this whole saga can conclude.

However, the social media company chalked up an operating loss of US$127.8 million, reversing the US$52.2 million operating profit in the same period last year.