We look into a REIT, a property giant, the latest inflation data and the sale of properties from a co-operative. 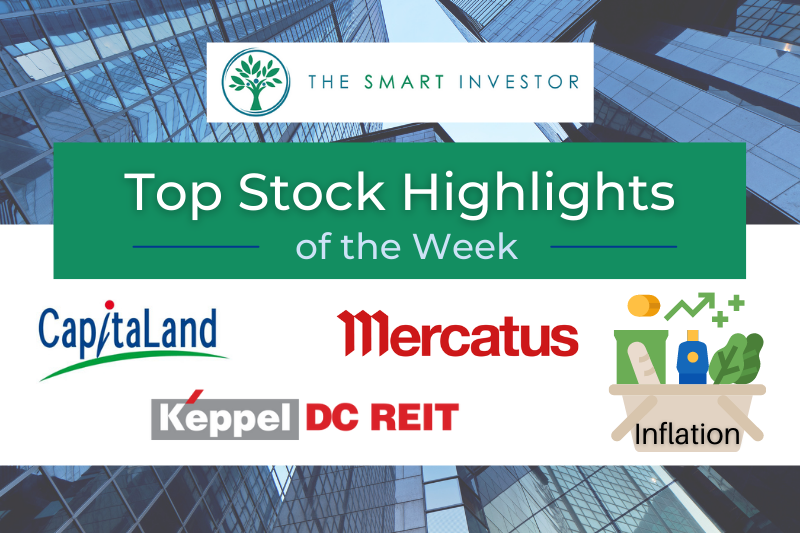 Welcome to the latest edition of top stock highlights where we look at interesting snippets from the business world.

Keppel DC REIT announced its follow-up data centre acquisitions in China nearly a year after making its first acquisition in the country.

In July last year, the data centre REIT purchased a fully-fitted data centre in Guangdong province for around S$132 million.

This facility is the first of six data centres to be completed within the Bluesea Intelligence Valley Mega Data Centre Campus, with the REIT having the right-of-first-refusal over the remaining five.

Keppel DC REIT is now buying another two data centres for around S$297.1 million that have a gross floor area of around 40,920 square metres.

The two centres will be master leased on a triple-net basis for 15 years and will improve the REIT’s portfolio occupancy to 98.9% and its weighted average lease expiry by leased area to 8.8 years.

The expected completion dates for the acquisitions are the second half of 2022 and the third quarter of 2023.

CapitaLand Investment Limited, or CLI, announced that it has established its first onshore RMB fund in China.

This was done in partnership with a domestic asset management company and CLI will end up owning a 12% stake in the RMB 700 million fund.

The fund is acquiring a quality office building in Shanghai and this transaction will build up CLI’s presence in China and accelerate its growth momentum.

The property giant is increasing its channels for fundraising and is looking to launch more RMB funds to capture special situations and other investment opportunities across different asset classes.

Currently, CLI has a portfolio of more than 200 properties across 40 Chinese cities with total assets under management of S$46 billion as of 31 March 2022.

Singapore’s inflation continues to rise in line with countries such as the US and UK, with core inflation hitting its highest level in more than 13 years.

The last time Singapore experienced such high inflation was back in December 2008, during the depths of the Great Financial Crisis, when core inflation hit 4.2%.

Breaking down the components, food inflation hit 4.5% in May, up from 4.1% in April, while electricity and gas prices surged by 19.9% in May.

Overall inflation rose to 5.6% year on year in May, exceeding the 5.4% reported in both March and April.

There seems to be no respite for now as core inflation is forecast to increase further in the coming months before easing by the end of this year.

However, the government has announced a S$1.5 billion support package to help cushion the effects of rising inflation.

On your part, you can also consider investing your money to beat inflation over the long run.

It’s not a common sight to see prime retail properties being offered up for sale, but that is exactly what happened last week.

Mercatus, a co-operative in the NTUC stable, is bundling four of its properties in Singapore for sale.

The four assets are – Jurong Point, AMK Hub in Ang Mo Kio, a 50% stake in Nex mall in Serangoon, and around 110,000 square feet of strata space in Thomson Plaza.

The total net lettable area to be sold comes up to around 1.5 million square feet.

The co-operative hopes to sell the assets at a price above S$4 billion, and a few of the Singapore REITs could be suitors as these are quality assets that are seldom available for purchase.

Retail REITs such as Frasers Centrepoint Trust (SGX: J69U) and Starhill Global REIT (SGX: P40U) could be contenders for some of these properties.

An acquisition conducted by one of these REITs could help to grow both its asset base and DPU.