Top Stock Highlights of the Week: Keppel Corporation, Sea Limited and Singapore as the Millionaire Capital

We look at recent news of a blue-chip conglomerate and review the results of a fast-growing e-commerce company. 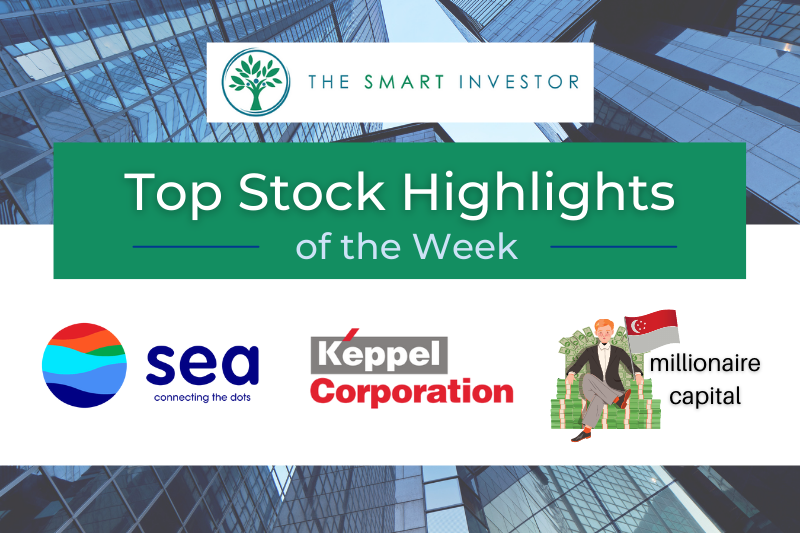 Welcome to the latest edition of top stock highlights where we present interesting business snippets or earnings reviews.

The vessel, known as P-80, will be the second FPSO that Keppel O&M will be building for the state-owned oil major.

It is scheduled for completion in the first half of 2026 and this contract will add over S$4 billion to Keppel O&M’s order book.

As a recap, Keppel O&M’s net order book as of end-June 2022 stood at S$4.4 billion, so this contract alone will almost double the division’s order flow.

Elsewhere, Keppel Corporation is also partnering with Keppel Infrastructure Trust (SGX: A7RU), or KIT, to co-invest in a sustainable urbanisation business and a renewables project.

Keppel Corporation will end up with an 18% ownership of this business.

Both KIT and Keppel Corporation will also jointly invest in a 50.01% stake in a German wind farm that will increase the latter’s renewable energy portfolio to approximately 2.2 gigawatts.

The investment amount is around S$445.3 million and the 50.01% stake will be equally split among the two businesses.

The business generated a negative free cash flow of close to US$1.7 billion in the same period.

Digging into each of Sea’s divisions, the e-commerce under Shopee saw gross orders jump 42% year on year to two billion while gross merchandise value rose 27% year on year to US$19 billion.

Globally, Shopee continued to rank as the top app on Google Play in the shopping category based on the total time spent using the app.

Sea Limited is, however, suspending its e-commerce revenue guidance for the remainder of 2022 due to macro uncertainties.

Moving on to the digital entertainment segment under Garena, quarterly active users witnessed a 15% year on year decline to 619.3 million.

Despite the decline, the latest figure is a slight increase from the previous quarter’s 615.9 million after the company saw two consecutive quarter on quarter declines in this metric.

On the bright side, Sea’s digital financial services division did well, with revenue more than tripling year on year to US$279 million.

Quarterly active users continued to rise by 53% year on year in 2Q2022 with total payment volume jumping by 36% year on year to US$5.7 billion.

The number of millionaires in Singapore as a proportion of its population looks set to rise, according to a report from HSBC (LON: HSBA).

The bank projects that in the next eight years, the share of millionaires will rise to 13.4% of the population, up from just 7.5% last year.

Wealth is measured as the cash in bank accounts plus investments in securities such as stocks and bonds, along with any real estate holdings minus their associated mortgage amounts.

This steady rise bodes well for companies selling luxury goods as spending on discretionary goods is set to rise.

And let’s not forget that luxury brands such as Ralph Lauren (NYSE: RL) and Hermes International (EPS: RMS) that operate in Singapore will also see a boost in their sales.