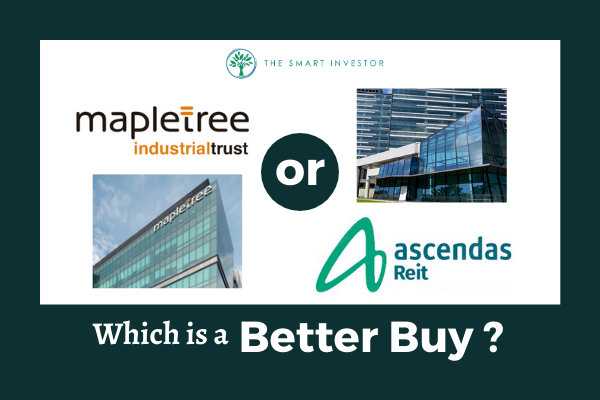 With the plethora of REIT choices on the local stock market, you’d be forgiven for feeling confused over which one to select.

If we layer on a once-in-a-century pandemic, this decision becomes even tougher.

Retail REITs have been badly hit by social distancing rules and movement control restrictions, while hospitality REITs are suffering from a dearth of visitors as governments impose lockdowns and border closures.

This crisis has, however, demonstrated the relative resilience of three REIT sub-types.

These include industrial REITs, commercial REITs and healthcare REITs.

As their tenants have been less affected by the pandemic’s adverse impact, these REITs have managed to hold their own during this tough period.

Zooming into the industrial REITs sub-sector, we take a look at two REITs that are both large and have strong sponsors.

They are Mapletree Industrial Trust (SGX: ME8U), or MIT; and Ascendas REIT (SGX: A17U), or A-REIT.

Both REITs have weathered this storm admirably thus far. As investors, which should you choose as the better investment?

Let’s have a look at several aspects of both REITs to find out.

Hence, the numbers above represent the latest fiscal half-year earnings that each REIT has reported.

Though the periods are not comparable, it should be noted that A-REIT was the more resilient of the two, with a year on year rise in both gross revenue and net property income (NPI).

MIT saw revenue and NPI inching up year on year, but experienced a 4.2% year on year decline in distribution per unit (DPU) as tenant reliefs were doled out due to COVID-19.

A-REIT, however, saw a larger 10.8% year on year fall in DPU as the total number of units increased due to a rights issue conducted in December 2019.

Looking at both REITs’ financial indicators, the gearing level for both remains well below the maximum threshold of 50% allowed by the authorities.

With gearing below 40%, both MIT and A-REIT still have ample room to gear up for future acquisitions.

Cost of debt is nearly similar for both REITs, staying low at below 3%.

However, MIT has a higher interest coverage ratio of seven times versus 4.3 times for A-REIT.

During challenging times such as these, a higher ratio would bring more comfort to unitholders.

For dividend yield, MIT currently sports the lower of the two, at 4% versus A-REIT’s 4.8%.

Do note, though, that part of the reason the higher yield was A-REIT’s recent announcement of a massive fund-raising exercise for its acquisition of two freehold office properties in the US.

The fund-raising involves a private placement of shares as well as a preferential offering of 37 new units for every 1,000 held at S$2.96 per unit.

Finally, we have a look at operating metrics such as occupancy rate and the weighted average lease expiry (WALE).

These two indicators provide an idea of the space utilisation for each REIT and also looks at the average length of tenants’ leases.

A longer WALE and a higher occupancy rate will signal lower risks during a downturn.

In this respect, MIT has slightly better metrics with occupancy at 92.3% and a WALE of 4.2 years.

Both MIT and A-REIT have been actively engaging in acquisitions in the last few months.

A-REIT had just announced its office building acquisition, and this acquisition will see DPU accretion of 0.85%, while aggregate leverage will rise to 36%.

MIT announced two acquisitions – one of a 60% remaining interest in 14 data centres in the US back in June, and another of a data centre and office property in September.

The former acquisition has a higher DPU accretion of 3.4% compared with A-REIT’s recent acquisition.

While A-REIT has some exposure to data centres, it is small in comparison to MIT’s data centre stake.

Based on the above analysis, MIT is also the less risky REIT to own and has suffered a small DPU decline compared to its counterpart.