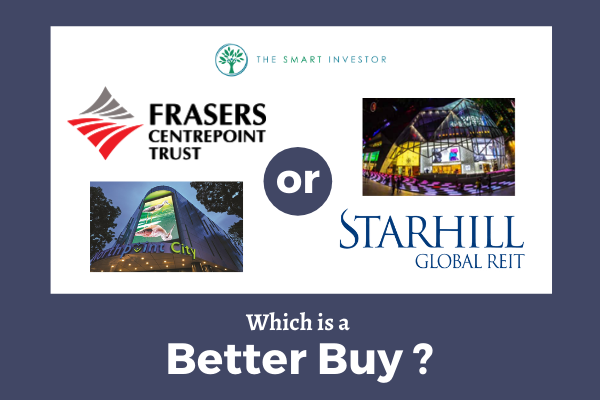 During the circuit breaker from April to early June, malls have been forced to temporarily shut.

When Phases I and II of safe reopening commenced, some malls saw improvement but still experienced reduced footfall because of continued social distancing measures.

Although the coronavirus situation has been somewhat under control in the past few weeks, the government is warning against complacency.

It has recently announced that Phase III of the reopening may take place by the end of 2020, where the size of gatherings may increase from five to eight people.

More activities will be allowed to resume, while larger groups will also be permitted for such activities.

This announcement must be music to retail REITs’ ears as their tenants will look forward to increased business as more people are allowed to mingle.

Frasers Centrepoint Trust (SGX: J69U), or FCT, owns a portfolio of suburban malls in Singapore such as Causeway Point, YewTee Point and Anchorpoint, to name a few.

Two Singapore retail malls, Wisma Atria and Ngee Ann City, made up 51% of revenue and 55.6% of net property income for the fiscal year ended 30 June 2020.

We take a look at two retail REITs to see which is the better buy as the economy slowly recovers.

Looking at the above, it seems SGR saw a sharper year on year fall in gross revenue and net property income (NPI).

However, it’s good to note that the periods for comparison differ, with FCT’s first-half ending 31 March, right before the circuit breaker.

FCT’s year on year rise in revenue and NPI was achieved before the closure of malls around Singapore.

DPU for SGR fell by 68.2% year on year as sums were retained by management for tenant relief, and part of the distribution (S$7.7 million) was also deferred to the next fiscal year ended 30 June 2021, as allowed by the Ministry of Finance and the Inland Revenue Authority of Singapore.

A better indicator of which REIT performed better will be to observe shopper traffic instead (please see below).

Gearing and cost of debt

Looking at both REITs’ latest quarter, SGR has a higher gearing level compared to FCT, implying that it has a lower debt headroom for acquisitions funded by debt.

The Monetary Authority of Singapore had raised the leverage limit for REITs from 45% to 50% back in April to help them to better cope with COVID-19, so both REITs are still comfortably below that threshold.

SGR also has a higher cost of debt compared to FCT and has to pay higher finance charges.

When it comes to distribution per unit (DPU), I used the half-year latest DPU from FCT and annualised it, against SGR’s full-year DPU, to gain a more meaningful comparison.

To be fair, it’s not a complete apple-to-apple comparison, but it does indicate the level of dividend yield each REIT’s shares provide.

SGR is a clear winner in this case as its yield is 6.7%, but investors should take note that DPU may continue to stay depressed due to weak sentiment at its malls.

SGR’s share price has also plunged nearly 40% year to date, resulting in a dividend yield that seems high but may reflect weak operational performance ahead.

FCT had just concluded the purchase of a remaining stake in AsiaRetail Fund to acquire an additional five suburban malls to its portfolio.

This transaction is expected to be accretive to DPU, bumping it up 8.6% using the fiscal year 2019’s DPU.

Finally, we look at shopper traffic through each REIT’s malls.

For FCT, the month of August saw a recovery for its malls as shoppers came back to patronise the shops there, resulting in a 36% year on year fall in traffic.

In contrast, for SGR’s malls, the fourth quarter coincided with the circuit breaker period and saw shopper traffic plunge by 87% year on year.

As a fairer comparison, we looked at FCT’s nadir during April and the REIT disclosed that shopper traffic fell by 68.3% year on year back then.

So, it would seem that SGR’s malls suffered a much sharper drop in traffic compared to FCT’s malls, as the former’s shopping malls had less essential services and catered more to tourists.

Get Smart: Continue to monitor both REITs

FCT seems like the clear winner here, as its suburban malls attract more locals from the heartlands as compared to SGR’s malls which cater more to tourists.

SGR has also not conducted any acquisitions to boost DPU, unlike FCT.

That said, SGR does have an office component that helps to buffer a bit of the NPI drop, though this forms less than 50% of both revenue and NPI.