We delve into the latest earnings from two companies and also recent corporate developments at both ST Engineering and Meta Platforms. 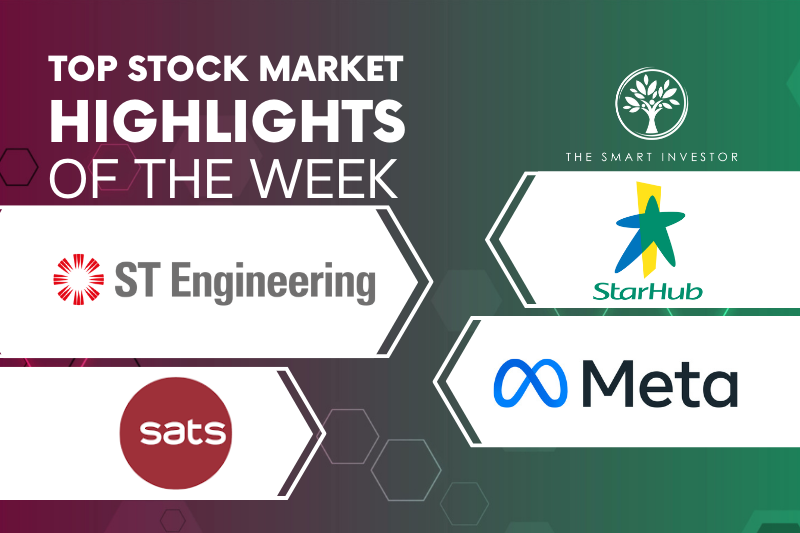 Welcome to this week’s edition of top stock market highlights where we feature interesting snippets from corporate events and/or earnings.

The total consideration for the divestment amounts to US$15 million, or about S$21 million.

In addition, STE may also receive earn-outs for a total of US$10.25 million subject to the award of future shipbuilding contracts to Halter that fulfills certain operating margin metrics.

This sale will result in the recognition of approximately S$13.3 million in loss on disposal and the transaction should close by the end of this year.

The group will, however, retain its marine business in Singapore which it considers to be “core and strategic”.

STE has undergone a portfolio review to ensure it focuses on businesses that are both strategic and yield higher returns.

The decision to sell these two units means that around S$1.9 billion of STE’s order book will be removed from end-September.

Excluding these orders, the group’s order book remains robust at S$25 billion as of 30 September 2022, up more than 10% from the S$22.2 billion reported at the end of June.

STE also maintained its 2026 growth targets that it communicated in its five-year plan during its 2021 Investor Day presentation.

Both StarHub’s entertainment and enterprise divisions also saw double-digit year on year increases in revenue of 17.7% and 16.3%, respectively, to S$55.4 million and S$220.9 million.

Mobile revenue grew by 8.8% year on year in 3Q2022 with the opening of borders which resulted in a higher average revenue per user (ARPU) of S$31 compared with S$28 a year ago.

However, net profit tumbled 32% year on year to S$27.4 million, driven by higher staff costs, marketing and promotional expenses, and investments relating to IT transformation and network.

The telco has updated its FY2022 guidance for service revenue to increase by 12% to 15% year on year, up from 10% previously.

SATS reported its fiscal 2023’s first half (1H2023) earnings that saw the positive effects of the surge in air travel.

Revenue for the ground handler jumped 41.3% year on year to S$804.5 million, buoyed by growth in cargo volume and a recovery in travel demand.

Although the share of earnings of its associates and joint ventures surged from S$0.9 million in 1H2022 to S$17.6 million in 1H2023, it was insufficient to offset the operating loss.

The group did not declare any interim dividend as it generated a negative free cash flow of S$87.4 million for 1H2023.

The outlook for SATS looks positive as it expects the recovery in passenger travel to sustain into 2023.

The group is also acquiring Worldwide Flight Services in a S$1.6 billion transaction for which SATS has yet to announce the funding.

Meta Platforms has announced this week that it is cutting more than 11,000 jobs, amounting to around 13% of its workforce, to save costs amid a downturn in advertising spending.

These layoffs are among the largest this year among the technology companies and are the first major retrenchments in Meta Platforms’ 18-year history.

CEO Mark Zuckerberg admitted that he was blindsided by this downturn as he had expected online commerce trends to persist post-pandemic.

The social media company will also reduce its office footprint, spend less on discretionary items, and freeze hiring into the first quarter of next year.