We look at a mega-acquisition by a Hong Kong REIT, Singapore’s latest retail sales and the passing of a technology icon. 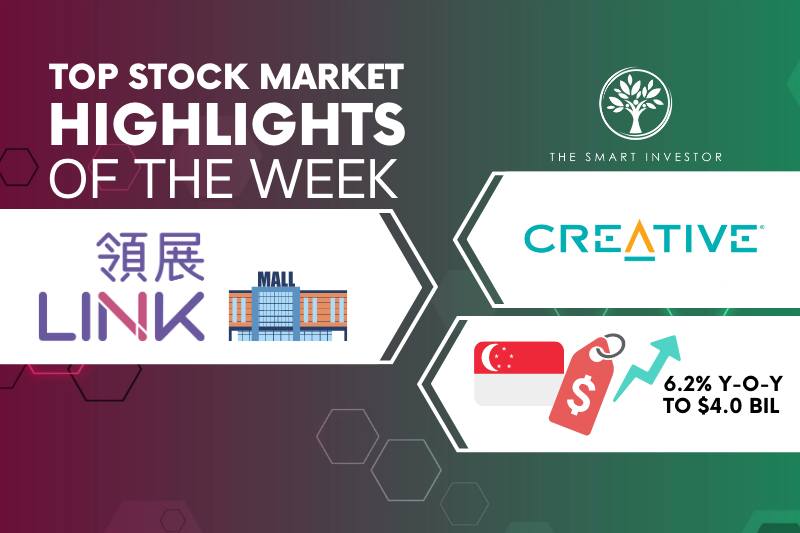 Welcome to the latest edition of top stock market highlights.

Late last month, Link REIT, Asia’s largest REIT, announced that it will buy a portfolio of Singapore shopping malls for S$2.16 billion from Mercatus Co-operative, a unit of NTUC Enterprise.

Back in August, there were rumours that several REITs such as Frasers Centrepoint Trust (SGX: J69U) and CapitaLand Integrated Commercial Trust (SGX: C38U) were bidding for Mercatus’ assets.

But in the end, Link REIT secured the deal.

As part of the transaction, HK-based REIT will gain ownership of two suburban retail malls in Singapore – Jurong Point and Swing By @ Thomson Plaza.

In addition, the REIT will enter into a 10-year asset and property management agreement for a third suburban mall, AMK Hub.

Mercatus will remain the owner of AMK Hub.

Both properties enjoy almost full occupancy and generate an annualised net property income of S$106 million as of October 2022.

Jurong Point is one of Singapore’s largest suburban malls with 720,000 square feet of net lettable area (NLA) with an average footfall of five million per month.

Swing By @ Thomson Plaza has an NLA of 110,000 square feet and is located next to the Thomson-East Coast MRT Line.

Link REIT will fund the acquisition using a mixture of cash and debt, with its gearing rising from 23.2% to 27.1% as of 30 September 2022 after this transaction.

Creative Technology, a company that provides technical solutions for the event, experiential and installation markets, announced on 4 January that its founder and CEO, Mr Sim Wong Hoo, had passed away.

Sim would have turned 68 this year.

He founded the business back in 1981 and has led the company since its inception.

Creative Technology made history in 1991 by being the first company to list its shares on the NASDAQ Composite Index.

Creative is best known for its Sound Blaster Card, launched in 1989.

At the time, the sound card was a game-changer for the industry as it opened the door for personal computers to produce high-quality sound.

For his contributions, Sim was named Businessman of the Year twice – in 1992 and 1997, during the Singapore Business Awards.

As it stands, Sim was the only substantial shareholder in Creative Technology, holding a third of its shares based on its latest fiscal 2022’s annual report.

The company, however, is now a pale shadow of its former self.

Gross profit fell by 31% year on year to S$19.5 million and the company reported a net loss of S$11 million, higher compared to the prior year’s S$7.7 million net loss.

If cars are excluded, retail sales would have risen by 8.7% year on year to S$3.6 billion.

The three main categories for online sales were computers and telecommunication equipment (51.4%), furniture and household equipment (34.2%) and supermarkets and hypermarkets (14.5%).

The higher online sales proportion can be attributed to year-end shopping events such as Singles’ Day and Black Friday.

The numbers are good news for Singapore’s economy as it demonstrates robust demand for consumer goods.

Yet, the outlook ahead looks cloudy for Singapore’s economy.

Global economic growth is expected to slow further to 2.7% this year from 3.2% in 2022, with one-third of the world economy projected to be in a recession.

Should this economic tsunami wash over Singapore, it could severely crimp retail sales this year and lead to a curtailing of consumer spending as more people tighten their belts.

Want to know what to expect in the stock market in 2023? Which were the best performing stocks and blue chips in the Singapore market in 2022? Be prepared for 2023 with our special FREE report. Click HERE to download “Year in Review 2022”