We look at recent updates from two blue-chip companies and a US-listed Singapore growth stock. 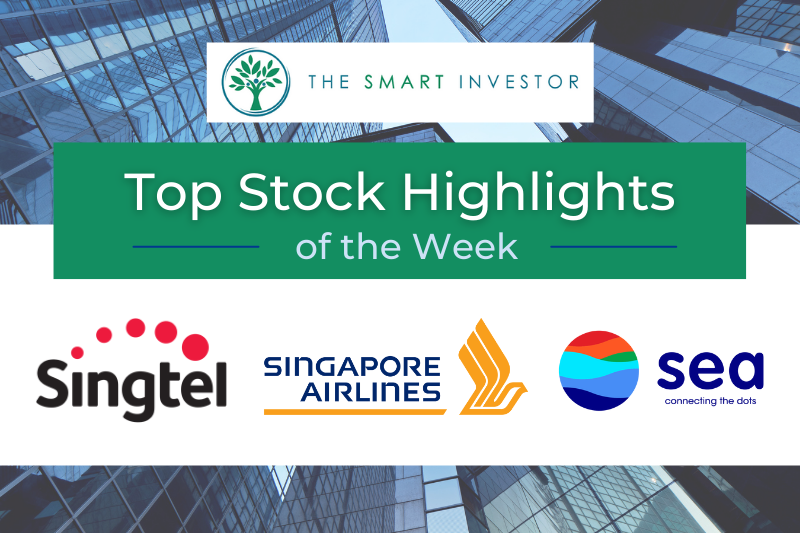 Welcome to the latest edition of top stock highlights where we feature interesting snippets from companies.

The consideration payable is approximately S$330 million and will be paid for in cash.

The purchase price was set at a 5% discount to the volume-weighted average price for Intouch’s shares.

Singtel currently owns 21.21% of Intouch and this acquisition will raise its ownership stake to 24.99%.

This move represents Singtel’s commitment to the Thai market and reinforces the telco’s position as two of the largest shareholders of the Intouch, alongside Gulf Energy (BKK: GULF).

Through its increased stake in Intouch, Singtel will also increase its economic interest in Advanced Info Services (BKK: ADVANC), or AIS.

AIS has been an associate of Singtel since 1999 and is Thailand’s largest mobile operator with more than 45 million customers.

Thailand’s digital economy is projected to nearly double from US$30 billion in 2021 to US$56 billion in 2025, said Singtel CEO Yuen Kuan Moon, adding that this move is part of the group’s strategy for recycling capital to invest for growth.

In addition, Thailand is expected to boost its telecommunication infrastructure and deploy 5G technology as part of the country’s digital transformation initiative.

These numbers should significantly boost Singtel’s Thai associates’ prospects and allow for steady and sustained growth in the years ahead.

The latest numbers have been released by Singapore Airlines Limited, or SIA, and show that the recovery in air travel is gaining steam.

Compared with May last year, it was a more than 14-fold jump and showcases the pent-up demand for air travel.

SIA has noted that air travel recovery has been strong for all regions apart from North Asia (read: China).

As of end-May, SIA’s group network covered a total of 97 destinations including Singapore.

There may be more upside to come for the airline.

However, it was still less than one-third of the 1.5 million visitors registered in May 2019, before the pandemic broke out.

Shopee, the e-commerce arm of US-listed Sea Limited, has announced that it is pulling out of Spain.

At the same time, the unit is retrenching staff in Southeast Asia and South America.

Back in March, Shopee abruptly shut its India business and also exited France.

In addition, Sea Limited has also announced global layoffs for ShopeePay and ShopeeFood, its digital wallet and food delivery businesses.

Shopee CEO Chris Feng has cited “elevated uncertainty” as the principal reason for the job cuts and exit.

Sea Limited has, however, made significant headway in Latin America, a region that is dominated by e-commerce giant Mercadolibre (NASDAQ: MELI).

Analysts believe that this pullback can help Sea Limited to conserve cash amid an increasingly competitive environment with a looming economic slowdown to boot.