We bring you results, snippets and updates from a bunch of companies and REITs. 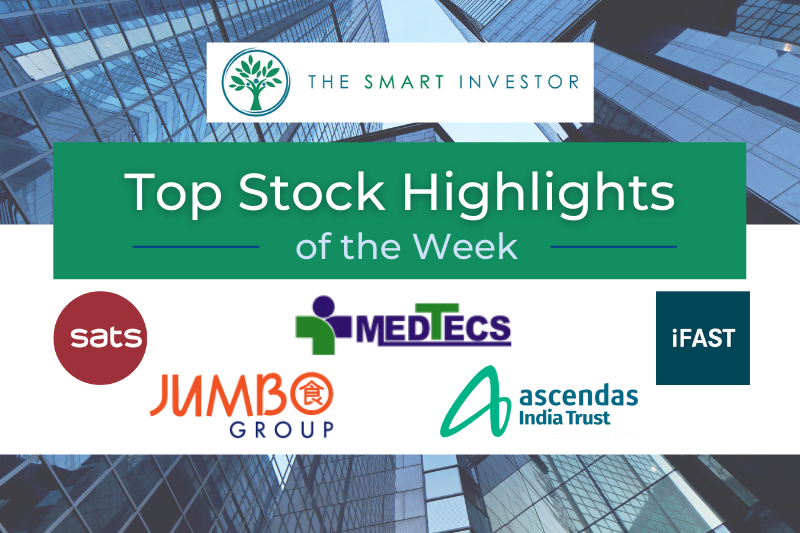 Here are some highlights and updates from a smattering of blue-chip companies, REITs and smaller businesses.

SATS announced that Foodflix, its brand accelerator arm that invests in different brand ventures, has collaborated with a variety of local hawkers and food and beverage (F&B) brands to help them internationalise.

It’s a win-win deal as the local hawkers can enter new markets while SATS can expand its portfolio of branded food solutions.

During its recent Capital Markets Day, the ground handler set a goal of increasing its food solutions business to 60% of its revenue by fiscal 2025.

Some of the brands that SATS is working with include Boon Tong Kee chicken rice, Song Fa Bak Kut Teh, the Killiney Group, and Ponggol Nasi Lemak.

Under the arrangement, SATS provides culinary consultation and product innovation opportunities to brand owners and enables them to increase their channels for customers to try out their food.

iFAST’s Malaysian Global Markets (iGM) division has reported that its assets under administration (AUA) has surpassed the RM 1 billion mark.

This represents an increase of 113% year on year for the financial technology group.

iGM Malaysia was launched just three years ago in 2018 and the division has now built up a team of 80 in-house wealth advisors that serve more than 6,000 customers across Malaysia.

The group looks on track to grow its AUA to reach its target of S$100 billion by 2028 as highlighted in its recent five-year growth plan.

For FY2021, revenue fell by 16.2% year on year to S$81.8 million as movement restrictions had impacted dining-in and footfall for the majority of Jumbo’s outlets.

Jumbo currently owns a total of nine different brands spread out across 38 outlets in 11 cities around Asia.

To cope with the pandemic, the group has pivoted from being tourist-reliant to expanding its fast-casual food concepts in heartland locations.

Jumbo also managed to open a Jumbo Seafood outlet in Universal Resorts Beijing that has done very well and pushed up the revenue for its China division by 50.1% year on year.

The group is optimistic that business conditions should improve in the current fiscal year as dining-in has been reintroduced for groups of up to five people, with the Singapore government focused on differentiating vaccinated and unvaccinated people.

The vaccinated travel lanes scheme should also provide a boost to tourism and bring back much-needed tourism revenue to Singapore’s shores, resulting in increased footfall to Jumbo’s outlets.

Ascendas India Trust, or AIT, has completed the acquisition of Building Q1 in Aurum Q Parc at Navi Mumbai.

This transaction was originally announced on 14 May 2018 in a forward purchase agreement (FPA) and the total consideration for the purchase was S$64.1 million.

Leasing for Q1 is underway and leasing momentum is expected to recover by 2022.

AIT also has a building Q2 covered under the same FPA with around 800,000 square feet available for development, of which leasing commitments have been received for 97,000 square feet.

The Trust also has a right-of-first-refusal for a third building with approximately 1.1 million square feet.

For 9M2021, revenue plunged by close to 60% year on year to US$115.3 million due to sharply lower demand after last year’s stockpiling.

The group also shifted to lower-margin original equipment manufactured items and incurred higher selling and distribution costs, resulting in net profit shrivelling by 77.2% year on year to US$19.3 million.

Unfazed, Medtecs intends to set up a glove manufacturing facility in Cambodia to expand its production capacity so that it can set up a resilient global PPE supply chain.

The group will also tap on e-commerce platforms such as Amazon (NASDAQ: AMZN), Alibaba (SEHK: 9988), and Shopee (under Sea Limited (NYSE: SE)), to further market and promote its products.