Casinos: The House Always Wins, But the Investor May Not 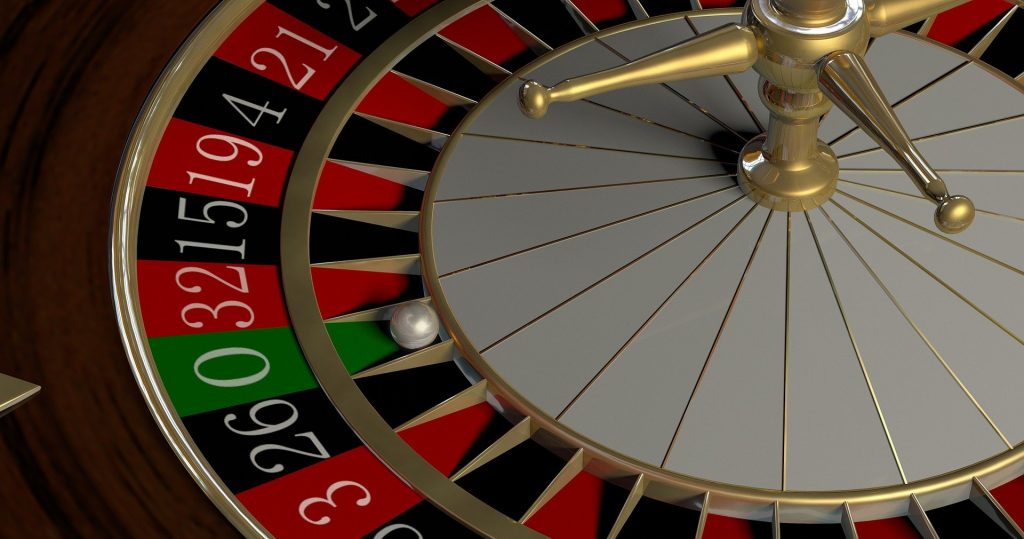 If you think of casinos as indoor theme parks for adults, then you probably won’t go too far wrong. But instead of rollercoasters and spinning teacups, the thrills that casino customers are likely to experience are slot machines that could, if they are lucky, spit out buckets of change, or howls of delight as a blackjack croupier draws a card and goes spectacularly bust.

But casinos are not only about games of chance. Many casinos have deliberately diversified their businesses to include shopping malls, theatres, hotels, restaurants and bars.

However, their main source of revenue still comes from games that include the spin of a wheel, the throw of a dice or the turn of a card. Gambling can account for between 50 per cent and 90 per cent of their total revenues.

It is not strictly true to say that they are just games of chance, though. Every game that a casino offers has a built-in statistical advantage for the house. The edge might be small.

But over time and the billions of bets placed by punters, the small edge should be more than enough to pay for the lavishness and opulence that often characterise casinos. Those fountains with their dancing lights and colourful lasers can cost a fair penny to build and operate. That can help to explain why casinos are not some of the most attractive when it comes to generating a return on shareholder funds. The median return on equity is a mediocre 6.5 per cent. It means that casino operators generate around $6.50 of profit on every $100 of shareholder money. 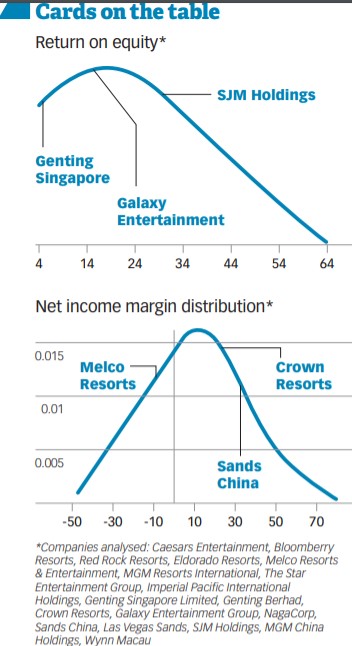 But that belies the extraordinary range of returns that these businesses exhibit. At the low end are Melco Resorts & Entertainment and MGM Resorts International with returns on equity of only a few per cent.

At the top end, Wynn Macau and MGM China have delivered returns in the high double digits. But the returns are far from consistent – they can vary widely from one year to the next. So, despite the built-in edge, luck, both for the punter and the house, can still play a big part.

That is best explained by the net profit margin for casinos. On average, they make about $9 of net profit on every $100 of turnover.

But the range can be vast. At the low end, Caesars Entertainment has not made a profit in five of the last eight years. Its average profit margin over that period is minus 13 per cent.

At the other end, Genting Singapore, which owns Resorts World Sentosa, has been profitable every year over the same period. Its net income margin is an enviable 20 per cent. It goes without saying that casinos can be very asset heavy. Just take a quick look at Marina Bay Sands. The 20-hectare resort boasts the world’s largest atrium casino with 500 tables and 1,600 slot machines and over 2,500 hotel rooms. When it opened in 2010, it was said to be the world’s most expensive standalone casino property. Consequently, these types of businesses require substantial revenues to stay in business.

In the main, they don’t do too badly. They generate around $50 of revenue for every $100 of assets employed in the business.

However, they can be prone to shocks. Between 2007 and 2012, some casinos in Macau were reporting asset turnovers in excess of two. In other words, they were generating revenues of $200 on every $100 of assets, which is four times more than the current average.

However, an anti-corruption crackdown by the Chinese government in 2014 frightened off many high rollers. Consequently, the asset turnover dropped almost precipitously.

The asset turnover can be an important driver of a company’s return equity. So too can leverage, which is essentially using other people’s money through borrowings to help generate a return for shareholders.

By and large, casinos do use leverage to help boost their returns. They have around sixty times more liabilities than assets. That is understandable, given that these are expensive businesses to build.

Consequently, the use of leverage can help to boost the returns that these companies generate for shareholders by around 70 per cent.

But excessive use of leverage can expose shareholders to unforeseen risks such as political shocks, economic downturns and interest rate rises.

Currently, the average dividend yield on casinos is an acceptable 3.3 per cent. However, with an average payout ratio of almost 60 per cent, and a median return on equity of 6.5 per cent, those dividends might only grow around 2.5 per cent a year. That said, there is chance of some capital growth if the operators should hit it lucky by being in the right location at the right time.

But in a crowded market that is becoming increasingly more crowded, it is a bet that some of us might not be prepared to make.

Note: An earlier version of this article appeared in The Business Times. David Kuo does not own shares in any of the companies mentioned.