Can This Heartland Retailer Continue to Grow Its Profits? If you were asked to name a popular neighbourhood retail store where our resident aunties and uncles mingle, it would probably be Sheng Siong Group Ltd (SGX: OV8).

This retailer has, over the years, opened up many stores located principally in heartland areas, catering to the quintessential HDB dweller.

Many may not have noticed this, but Sheng Siong has quietly ( some say covertly) taken over Dairy Farm International Holdings Limited (SGX: D01), or DFI, as the second-largest retailer in Singapore.

NTUC Fairprice has the widest and most extensive network in Singapore, but Sheng Siong has held it own, growing its store count over time and making itself an attractive a location to shop.

In short, as a retailer, Sheng Siong has been hitting all the right notes thus far. Let’s dig into the drivers behind the retailer’s success in order to find out if this trend can carry on over the next few years. 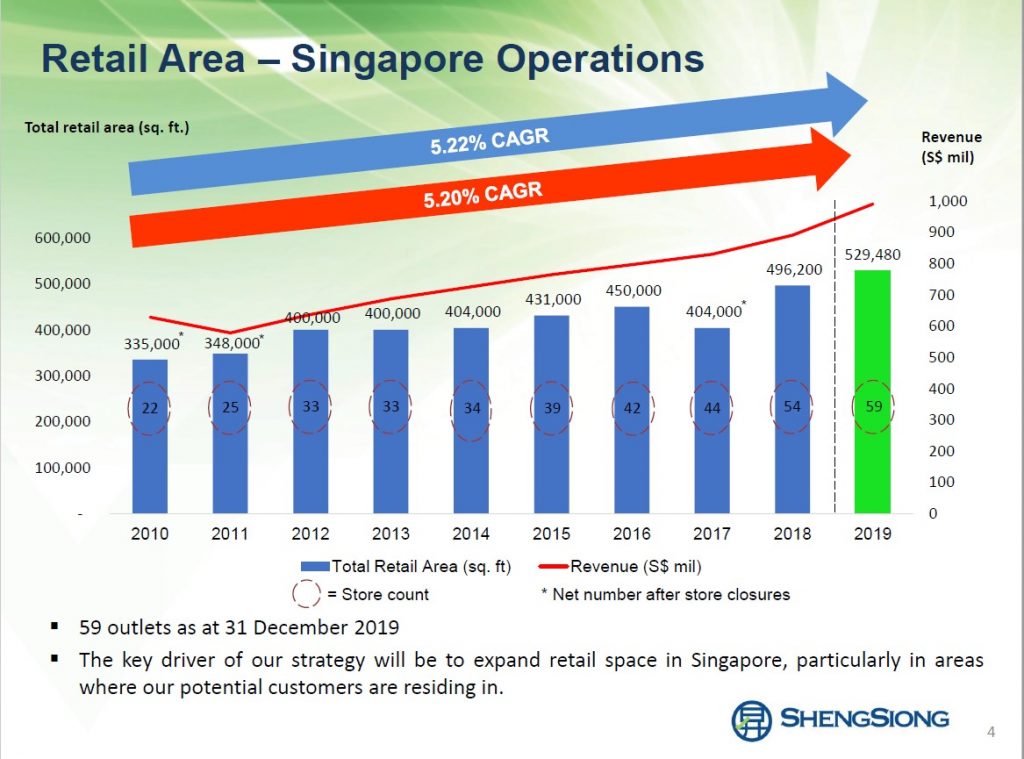 Sheng Siong’s financials have tracked its store openings closely. The graph above shows Sheng Siong’s store count and total retail area from 2010 to 2019. The group started out with just 22 stores in 2010 and has almost tripled its total store count to 59 stores over a span of nine years.

Impressive, no doubt, but the key question investors will want to know is — can Sheng Siong continue to grow both its revenue and net profit like it did over the last decade?

What investors need to realise is that Sheng Siong’s growth has been powered principally by the opening of new stores.

The group itself provides the numbers for us — for its 2018 revenue drivers, comparable same-store sales (SSS) made up just 1.7% while new stores represented 10.1% of the growth.

The retailer’s two new supermarkets in Kunming, China, made up the remaining 1%.

Sheng Siong’s reliance on new store openings to drive revenue could be a problem. As Singapore is a small country, the group may reach a saturation point within the next few years and may find it hard to continue to open stores without cannibalizing its existing ones.

The key is to be able to improve the comparable SSS. That could be tough, as retail sales for Singapore have been weak and competition is stiff.

Another source of earnings growth for Sheng Siong has been its impressive gross margin improvement over the years. Gross margin increased significantly from just 20.5% in 2009 to 26.9% in 2019.

Net margin, however, has stabilised somewhat around the 7% to 8% range due to overall higher levels of expenses.

The pace of increase in the gross margin has moderated in the last three years, even as Sheng Siong continues to improve on its sourcing abilities and leverage on its distribution centre to reduce its cost of goods sold.

Worryingly, though, it has had problems maintaining its net margin since the peak of 8.4% was hit back in FY 2017.

Though gross margin has continued rising, the net margin has declined for two consecutive years, in a sign that rising costs are slowly but surely eroding any increases in revenue and gross profit.

Sheng Siong is trading at a relatively high valuation of 25 times earnings, even as growth in net profit seems to be slowing for the group.

Although the group just opened two new locations in January 2020 at Aljunied Avenue 2 Block 118 and Marsiling Drive Block 202, it remains to be seen if it can continue to secure prime locations for the opening of more stores.

With a trailing dividend yield of around 2.8%, Sheng Siong seems to have neither the attributes of a growth stock (due to potential saturation) nor that of an income stock (yield is below 3%).

Time will tell if the group can continue to register top and bottom-line growth, but I’m not holding my breath.