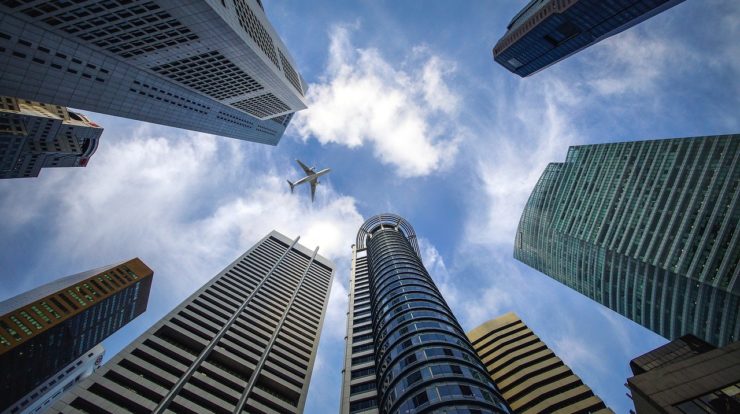 Investing in commercial REITs, or REITs that own major office properties can be rewarding. But it can also be challenging due to the industry’s cyclicality.

On Monday, we took a brief tour of the world of retail REITs. Today, we’re taking a stroll through the results of the six commercial REITs that have reported so far.

The three biggest REITs are sporting gross revenue near or above S$100 million in their latest quarter, as shown in the first graph below. Growth, though, has been relatively modest for the trio. 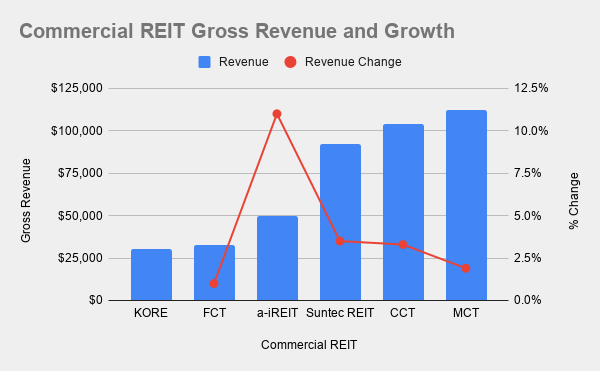 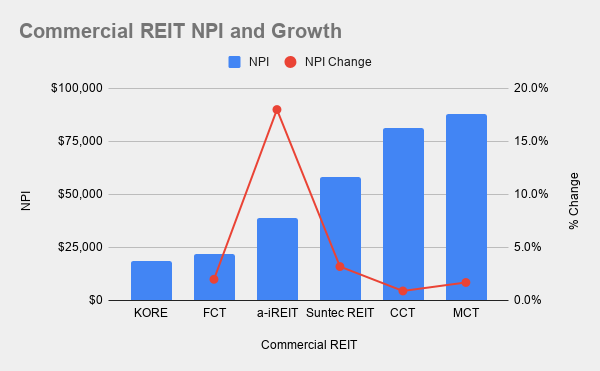 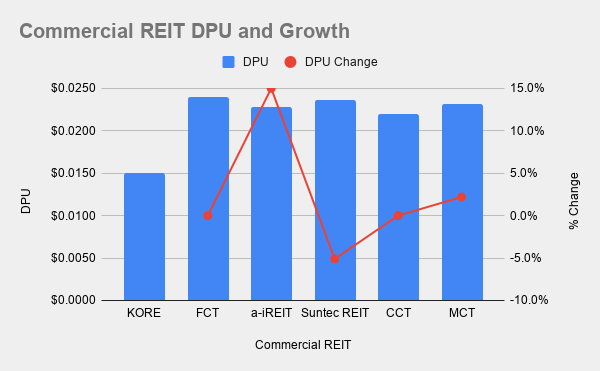 There could be better growth in the future, namely from acquisitions.

CapitaLand Commercial Trust had recently acquired 94.9% of Germany Main Airport Centre. The property is the REIT’s second in the European country and is expected to deliver a 1.4% accretion in pro-forma distribution per unit (DPU).

Meanwhile, the CapitaLand Commercial Trust’s CapitaSpring development, which is slated to be opened in the first half of 2021, has already secured an impressive 31% in committed occupancy.

Mapletree Commercial Trust has its own expansion plans which are already in motion. The REIT is in the midst of raising money to fund the acquisition of Mapletree Business City (Phase 2) which is forecasted to boost DPU by 4.0%.

Meanwhile, Suntec REIT posted 5.1% less DPU compared to a year ago. The reason for the decline is lower capital distributions.

Looking ahead, Suntec REIT has its 9 Penang Road development on track for completion before the end of 2019. The property’s office component is already 100% leased out to one tenant, UBS.

Ascendas India Trust (SGX: CY6U) is the outlier, posting a stupendous 18% year-on-year growth in gross revenue. The growth has translated into a pleasing 15% year-on-year increase in DPU.

Elsewhere, Keppel Pacific Oak US REIT (SGX: CMOU) has announced the acquisition of One Twenty Five, a two-building office complex in Dallas. KORE’s DPU is expected to grow by 1% from the acquisition.

Looking at the commercial REIT’s gearing, the average cost of debt and the average term to maturity provides a view on whether the individual trusts are growing responsibly. 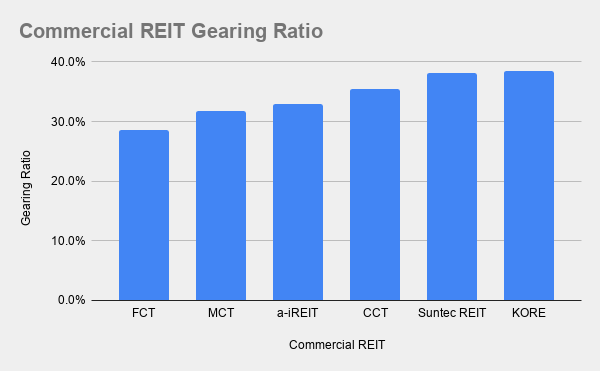 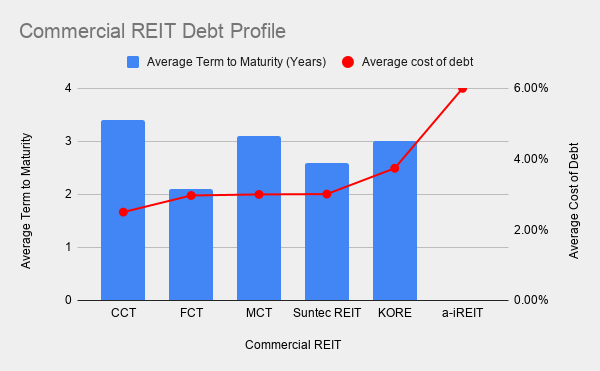 Frasers Commercial Trust (SGX: ND8U) as the REIT with the lowest gearing ratio among the commercial REITs above. Despite the available debt headroom, the REIT does not have any acquisitions in the horizon.

At the moment, Frasers Commercial Trust is focused on an asset enhancement initiative (AEI) at its Australian Central Park property and China Square Central.

On the other end, Suntec REIT and Keppel Pacific Oak US REIT both have gearing ratios that are above 38% which may leave the duo with less debt headroom for future acquisitions.

Out of the six REITs above, CapitaLand Commercial Trust has the best combination of the lowest average cost of debt coupled with the longest average term to maturity.

On the other hand, Ascendas India Trust’s average cost of debt is 6% where 65% of its debt is in Indian rupee and 35% in Singapore dollar.

Frasers Commercial Trust, Suntec REIT and Keppel Pacific Oak US REIT are all trading at around their book value.

Meanwhile, CapitaLand Commercial Trust is trading at a slight premium to its net asset value. Given the growth plans in place, both in the short and medium term, units could be worth paying up for. 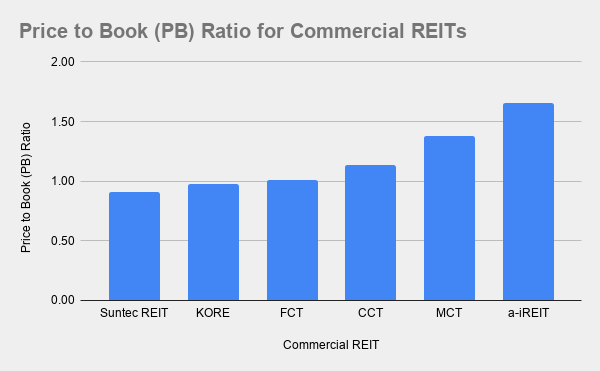 Ascendas India Trust, on the other hand, trades at 1.68 times its net asset value. Apparently, the market has decided to pay up for the growth that it sees. The India-based REIT will have to deliver on its promise to be worth the hefty price tag.

Get Smart: The X factor

The seven graphs above provide an overview of the commercial REITs.

But for all the numbers that we study, there are factors that are beyond our control. A key factor is the demand and supply of office space which can influence the price per square foot that REITs can charge.

Expansion to overseas markets such as Germany, the US, and India comes with currency risk.

Some currencies are more volatile than others. In the case of Ascendas India Trust, the Indian rupee has suffered a precipitous decline in the six-year period between fiscal 07/08 and fiscal 13/14 — see the orange line in the chart below. 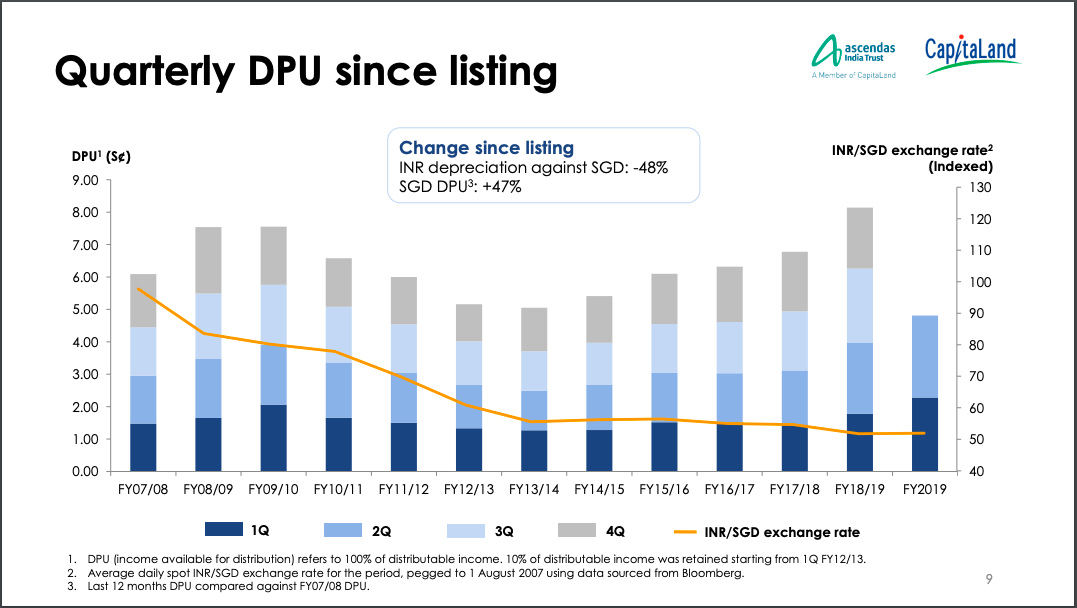 It’s only after the Indian rupee stabilised against the Singapore dollar from fiscal 14/15 onward that unitholders are able to finally able to reap the rewards of the trust’s underlying growth.

WeWork’s failed IPO attempt has raised questions over the long-term viability of co-working spaces. The developments here are worth watching. After all, commercial REITs maybe depend on their tenants for rental income. And that could include co-working spaces.

None of the information in this article can be constituted as financial, investment, or other professional advice. It is only intended to provide education. Speak with a professional before making important decisions about your money, your professional life, or even your personal life. Disclosure: Chin Hui Leong owns shares of Suntec REIT.

How REITs Can Help You to Enjoy a Comfortable Retirement

4 Singapore REITs Hitting 52-Week Lows: Are They a Bargain?