It was a tough year for IPOs, but here are five companies that made it to market this year. 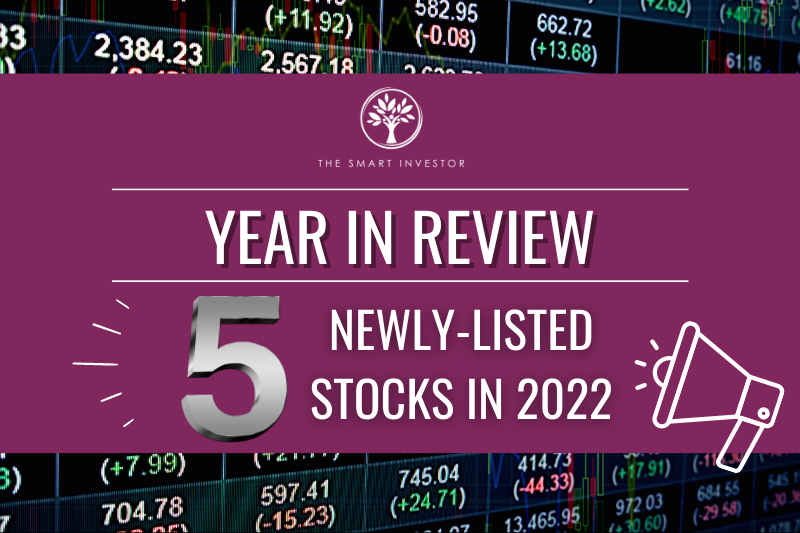 IPOs, or initial public offerings, represent a great way for companies to raise funds through the capital markets.

However, the success of an IPO hinges on market conditions.

When markets are volatile and valuations plunge, companies become hesitant to sell shares as they cannot raise as much money compared to when times are good.

2022 has been a tough year for markets with both the NASDAQ Composite Index and S&P 500 Index falling into a bear market.

Although the Straits Times Index (SGX: ^STI) has traded in positive territory thus far, rising interest rates have put a dampener on listings.

Accounting firm Deloitte reported that there were nine IPOs in the first 10 and a half months of 2022 that raised a total of S$580.4 million.

Of these, three were mainboard IPOs while the remaining six were on Catalist.

IPOs, however, do not include secondary-listed companies such as vehicle manufacturer Nio Inc (SGX: NIO) and liquor giant Emperador Inc (SGX: EMI), which offer a wider choice of stocks for investors.

Here are five newly-listed stocks in 2022 that could end up on your buy watchlist.

Heading the list is Vertex Technology Acquisition Corporation, or VTAC, which raised S$208 million back in January this year.

VTAC is a special purpose acquisition company, or SPAC, that sold shares at S$5 apiece.

A SPAC is a blank-cheque company that has 24 months from the time of its IPO to find a suitable acquisition target.

With January 2023 almost upon us, the SPAC has another 12 months to source for a suitable acquisition target, after which it can apply for another 12-month extension subject to the fulfilment of certain conditions.

iWOW is a technology provider specialising in integrated wireless Internet of Things (IoT) solutions as a service.

The manufacturer of the TraceTogether token used during the pandemic went public in April this year, raising a total of S$6.5 million by selling 26 million shares at S$0.25 apiece.

The group announced a mixed set of financial numbers for its fiscal 2023’s first half ending 30 September 2022.

The purchase is expected to enlarge iWOW’s customer base and extend its regional presence.

The company has operations in Singapore, Malaysia and Thailand and is the logistics arm of LHN Limited (SGX: 41O) (SEHK: 1730), a real estate management group.

For its fiscal 2022 ending 30 September, the group reported flat revenue at S$27.3 million.

An increase in the cost of sales and expenses resulted in a lower year on year gross profit and a net loss of S$3.2 million.

The Malaysian company, which was founded in 2006, raised around S$3.6 million.

It provides testing and certification services to the food, fertiliser, pharmaceuticals and medical devices industries.

Noontalk Media looks set to the last IPO for 2022, capping the count to 11 for the year as it debuted in late November.

Noontalk is a Singapore-based media entertainment company with businesses in artiste and talent management, multimedia production, and event conceptualisation.

Of these, 4.5 million shares were offered to the public.

There was a noticeable dearth of REIT listings in 2022, with the last two REITs listed on the local bourse being Daiwa House Logistics Trust (SGX: DHLU) and Digital Core REIT (SGX: DCRU) back in November and December 2021, respectively.

As 2023 beckons, investors could see some activity in this area.

Mapletree Investments had bandied the idea of listing a student accommodation REIT earlier this year.

If interest rate increases ease next year, we could see the return of more IPOs in the market, including some involving REITs.