We present snippets from two blue-chip companies, a telco, and a growth stock. 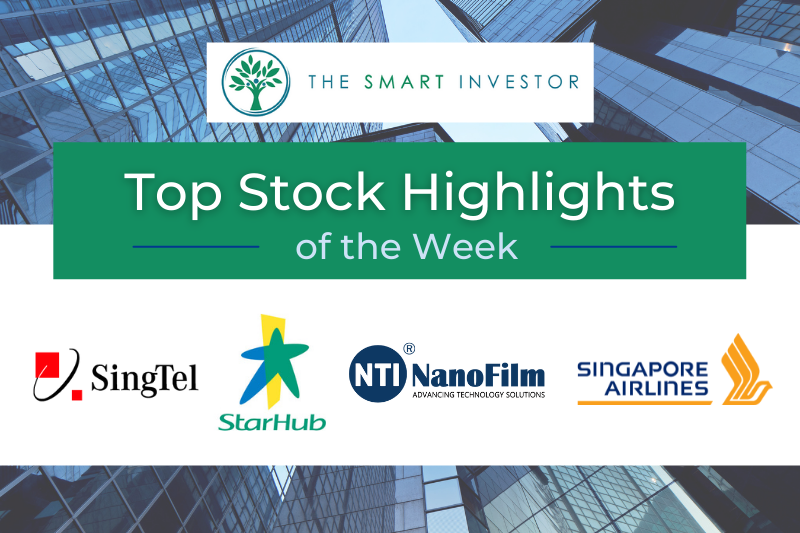 Welcome once again to our stock highlights segment, where we feature interesting snippets from various companies.

The carrier reported its first operating profit since the pandemic began, as vaccinated travel lanes helped to increase passenger volume.

Total revenue more than doubled year on year to S$2.3 billion for the quarter while the airline registered an operating profit of S$76 million.

SIA carried 1.1 million passengers for 3Q2022, a more than five-fold increase from a year ago.

SIA saw a significant increase in the number of destinations served as more countries opened up.

For the quarter, SIA’s passenger network covered 85 destinations, up from 65 in 2Q2022.

Singtel announced that it plans to appoint a developer to redevelop its Comcentre headquarters located along the Orchard Road belt.

The total cost of development, including land costs, is estimated to be in excess of S$2 billion.

This redevelopment will increase the building’s efficiency to unlock value from the property.

As part of the group’s capital recycling effort, it will divest the property into a joint venture company, of which it will hold a majority stake.

This move is in line with the telco’s planned strategic review that was announced in the middle of last year.

Singtel will occupy 30% of the space in the new development, with the remaining space leased out to tenants to generate a stream of recurring revenue for the group.

This redevelopment is expected to be completed in 2028 and Singtel will relocate from Comcentre in 2024, with employees shifting to temporary spaces at other Singtel locations around Singapore.

StarHub has announced that it had signed an exclusive partnership with The Premier League.

The group has inked a six-year deal to broadcast all 380 matches in the upcoming season.

Football fans will also be treated to a richer interactive user interface with features such as Party Watch, split-screen viewing, and performance statistics.

StarHub is also offering on-demand match replays as a number of the Premier League games will be screened in the wee hours of the morning.

Full pricing details for this service will be unveiled in June this year.

This announcement should be a welcome boost for the telco’s Entertainment division as its Pay TV subscriber base continued to decline by 11.1% year on year to 279,000 for the fiscal year 2021.

Nanofilm Technologies, or NTI, turned in a decent financial performance for FY2021.

The former division enjoyed increased adoption of its advanced material solutions by its clients, while the latter benefitted from a recovery in the capex cycle of its customers.

However, NTI’s Nanofabrication business unit saw a 30.7% year on year decline in revenue to S$7.8 million due to a project that ended in the first half of 2021.

The group is confident of its prospects as it enjoys a healthy order book for its industrial equipment division.

At the same time, it is seeing increased adoption of its advanced materials by its customers.

The Nanofabrication unit is also expected to perform better as new projects ramp up in 2022.

The group’s joint venture with Temasek Holdings, Sydrogen, is on track to recognise initial revenue on an automotive project in the second half of this year.